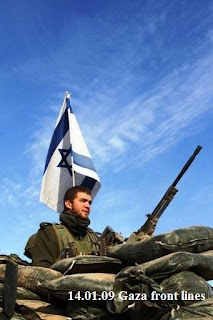 The war in Gaza has been going on now for two weeks, and credible “on the spot” reporting has been next to nil. By way of Beer and Sandwiches, the Tundra Tabloids received the following report that was made by one of the founding members of the 18 on the 14th of Jan. Many thanks to Aeneas for passing this to me. KGS
Aenaes: “The following was from an attachment to an email that I received recently:
Michael Fenenbock, veteran political consultant and founder of the18, made a lightning visit to the Gaza war zone yesterday to interact with IDF troops near the front.”
Accompanied by senior security personnel, Fenenbock gained access to a zone beyond where reporters are permitted to enter, Fenebock’s most striking impression was that morale is extremely high at all levels of command and that the professionalism and commitment of the IDF are impressive.
What follows is Michael’s first-hand report from the front lines.
“Rafi, the head of security for 17 kibbutzim bordering the Gaza Strip is an extraordinary man. Of Iranian Jewish origin, he calmly conducts business with an Uzi in his lap, three cell phones and walkie-talkies going at the same time; helicopters overhead, Israeli planes thundering in the distance; alarms announcing the firing of Kassam rockets at Ashkelon and the kibbutzim; he calmly races between rocket attack locations.
He calls a temporary halt to the briefing to take us into a kibbutz hothouse, where he hands us yellow bell peppers fresh off the vine.
We munch away as reports come in that one of the kibbutz vehicles has taken a bullet from Arab snipers. Nearby, IDF soldiers covered in dust and grime, refit damaged tanks and send them spewing black diesel smoke back into the fray.
Rafi stops to admonish four schoolboys from the kibbutz who are outside kicking a soccer ball. “Shai, get back in the shelter and take your friends with you,” he yells. The kids smile, wave, and continue kicking the soccer ball.
At the side of one of the massive IDF tanks I’m introduced to the young men of the tank crew who are taking a brief respite from the battle. “Hi, I’m Michael from New York,” says the chubby, balding old man leading the fight to prevent a Palestinian state. One tall, fair-haired officer responds, “And I’m Sasha from Moscow.” 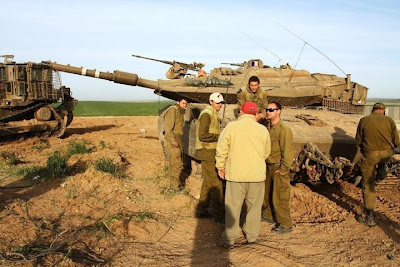 Michael engages another soldier in a discussion about the New York Yankees and their prospects this year.The soldiers all express their thanks for our visit and for our efforts to prevent a Palestinian state.

“Are you getting everything you need?” we ask, remembering the dreadful reports from Israeli troops of shortages of supplies and food during the 2006 Second Lebanon War. This time, the answers all come back the same. ‘Absolutely, we have everything.’ 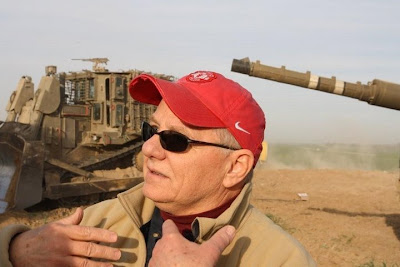 As we continue our tour of the staging area, we notice an officer who is briefing a group of men while flipping the pages of aerial photographs as three female soldiers who are in charge of piloting the intelligence drones drive by in a white jeep.

In an open area next to a cultivated field is a sight not seen in too many wars—dozens of civilian cars that belong to reservists who have reported for duty from all over the country.
From an observation post looking over Gaza that only a mountain goat could climb, we see smoke pouring from high-rise buildings. Many more tall buildings used as Hamas terrorist bases and launchpads have already succumbed to the Israeli onslaught. 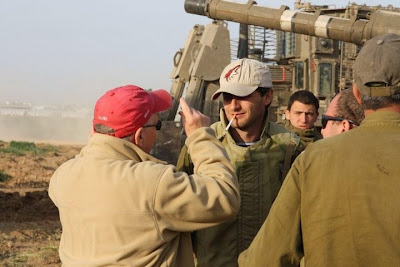 Rafi explains that he believed the promise of peace when Israel removed all its citizens from Gaza three years ago. He had friends on the other side, men he negotiated with about building a hospital that would serve mostly Palestinian families and about how the Karni crossing would become a mecca for trade. And he communicated with his security counterpart in Gaza regularly.
But it was all a ruse, an attempt to lull Jews into a false sense of security that would make them vulnerable to attack and defeat. “So that they could slaughter us.” Rafi says, shaking his head. Back at the kibbutz we see pieces and parts of the rockets fired on Israel’s southern residents. As we examine one piece of shrapnel we notice that it’s manufactured in China. Razor sharp, with mean looking pellets. Another rocket piece comes from Iran.
On the border, we pick up one of the flyers in Arabic that Israel distributed by the thousands to the citizens of Gaza, warning civilians to get out of the way of the impending military campaign. As we drive out of the war zone and head north back to Jerusalem, we pass a soldier hitching a ride in the other direction, toward the battle. When we glance back in the rearview mirror, we see a car driven by another young man in uniform pick him up.
Michael Fenenbock is a long-time American political consultant. He and his wife Daphne are the founders of the18 and the No on Two-State campaign. They live in New York, but spend a great deal of time in Jerusalem.
A little further north we come upon the line up of news crews, trucks, cameras, and satellite dishes. They are only allowed to go as far as this point.
Their distance explains why the media still manages to capture some of the dramatic images of the war, but has reported very little about the morale and sense of purpose and commitment of Israel’s fighting forces.
Our trip to the front cemented our resolve to carry on with the work of the18, the launch of a political style campaign to fight the creation of a Palestinian state, which has already gathered endorsements from an array of Israeli and US opinion makers.”