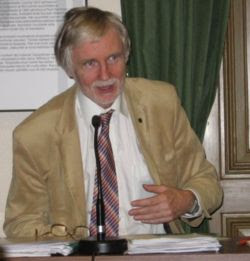 Boy am I glad that this empty suit of an SDP official is not the current Finnish Foreign Minister, fortunately, he’s not even in the current Finnish government. Erkki Tuomioja has a long history of vitriolic anti-Israel bias, representing the very same mindset that is prevalent in the biased Finnish news media.
I’m sure that the Finnish news journalism misses Ol’Scruffy and the SDP leadership, because presently, no one in the Center-right Finnish government is characterizing the Israeli government as a bunch of Nazis.

Here is “Eki’s” latest that brings back all the bad old days during his term as foreign minister, and why Finnish supporters of Israel are glad of his party’s demise. He hasn’t lost his penchant for Israel hatred, and even takes it to the extreme (as usual) to talk about war crimes.

From his den in the outer darkness where one hears the sounds of wailing and the gnashing of teeth, especially the gnashing of teeth, the empty suit of Erkki Tuomioja:
“The fighting in the Middle East is accelerating. Seven years ago, during my time as foreign minister, Iarrived to a Suomen Kuvalehti interview shocked, at how “Israel’s policy is to suppress, humiliate, subjugate and impoverish the Palestinians.” In the same interview, I also said that “the continuing expansion of the settlements was the worst threat to the entire peace process. Unfortunately, nothing has during this period changed for the better.

Israel has launched yet another destructive, unsustainable and unreachable goals, as well as using methods that are disproportionate and unjustifiable in its operation in the Gaza Strip, comforted by the fact that the U.S. once again, will finance its military operations and the EU in the next stage will repair the damage caused to the Palestinians. If any other country would use the same methods the challenges of war crimes would already be en route.”

Bla bla bla bla, “oh how I hate Israel let me count the ways”.
The only thing that hasn’t changed, is the increasingly smallness of the man called Ol’Scruffy, who hasn’t met an Islamofascist he hasn’t liked. Don’t kid yourself, the man may say he dislikes Hamas, but deep down I believe that he loves their totalitarianism and mindlessness. This man is no friend of any freedom loving person, especially if the person happens to be an Israeli. KGS