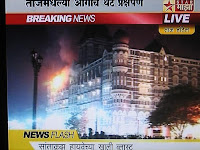 The parallels are all too clear. The Pakistani state which pays lip service to the badly misnamed ‘War on Terror’, allows jihadis to freely come and go to wage their war on their neighbor’s turf. Much of the same can be said of Syria, which has long harbored Islamic terrorists on its soil, that carry out raids against Israel.

Professor Barry Rubin speaks of the lessons learned by Israel, can be of great benefit to India in its own war against Islamic jihadism. This might be the beginning of a beautiful relationship between the two states, as they strengthen their ties to battle against the forces of Islamic jihad.

DEFENDING YOURSELF AGAINST TERRORISM: A DIFFICULT TASK

By Barry Rubin
For years, India has been subjected to periodic terrorist attacks throughout the country. But what happened in Mumbai is something new and different: a full-scale terrorist war.

This is the kind of threat and problem Israel has been facing for decades. What are the lessons for India from Israel’s experience, points also reflected by India’s own recent history?

First, India needs and has the right to expect international sympathy and help. It will get sympathy but will it get help? Once it is clear that other countries must actually do something, incur some costs, possibly take some risks, everything changes.

If the terrorists come from bases or training camps in Pakistan, after all, India wants international action to be taken. Pakistan must be pressured to close such camps, stop helping terrorists, and provide information possessed by Pakistani intelligence agencies.

But how might this happen? Will Western countries make a real effort? Are they going to impose sanctions on Pakistan or even denounce it? Will they make public the results of their own investigations about responsibility for the terror campaign against India?

Not likely. After all, such acts would cost them money and involve potential risks, perhaps even of the terrorists targeting them. Moreover, they need Pakistan for various things, notably to cooperate on keeping down other Islamist terrorist threats, not spread around nuclear weapons’ technology too much, and being cooperative on maintaining some stability in Afghanistan.

This parallels Israel’s situation with Syria, Lebanon, and Iran. For decades, the United States and some European countries have talked to the Syrian government about closing down terrorist headquarters in Damascus. The Syrians merely say “no” (though sometimes they have just lied and said the offices were closed). The United States even did put on some sanctions. But by being intransigent, pretending moderation, and hinting help on other issues, Syria has gotten out of its isolation.

So, despite all the pious talk about fighting terrorism, in real terms, India—like Israel—is largely on its own in defending itself from terrorism.

Another problem India faces, like Israel in the case of Lebanon, is that it is dealing with a country that lacks an effective government. Pakistan is in real terms a state of anarchy. Even within the intelligence apparatus, factions simply do as they please in inciting terrorism. Given popular opinion and Pakistan’s Islamic framework, even a well-intentioned government would be hard-put to crackdown.

In Israel’s case, the whole rationale for regimes like those in Iran and Syria is a radical ideology. So pervasive is the daily incitement to hatred and the lies, that popular opinion supports the most murderous terrorism. The murder of Israeli civilians brings celebrations in the Arab world. The usual types of appeals to law and order, holding governments responsible for their actions, shaming them, or going over their heads to appeal to the masses on humanitarian grounds simply don’t work.

So what’s a country to do? It will consider cross-border raids against terrorist camps or retaliation to pressure the terrorist sponsor to desist. Sometimes it will actually take such action. But can India depend on international support for such self-defense measures or will it then be labeled an aggressor?

How much is India willing to risk war with Pakistan even though it has a legitimate casus belli due to covert aggression against itself by that neighbor? And let’s not forget that Pakistan has nuclear weapons, a situation which Israel may soon face in regard to Iran.

Now we can see the logic of terrorism as a strategy by radical groups and countries pursuing aggression by covert means. The terrorists and their supporters have lots of advantages; the victims are not only put on the defensive but have to make tough decisions about self-defense.

Finally, there is the dangerous “root cause” argument. Many Western intellectuals and journalists—as well as some governments—are ready to blame the victim of terrorism. In Israel’s case, despite desperate efforts to promote peace, making of concessions, withdrawals from territory, and offer of a Palestinian state, it is said to be the villain as not giving the Palestinians enough.

The terrorists and their sponsors use this situation to their advantage. By being intransigent—demanding so much and offering so little—they keep the conflict going and are able to pose as victims simultaneously.

Will some suggest that if India merely gives up Kashmir and makes various concessions, the problem will go away? This might not happen but it is worth keeping an eye on such a trend.

The Indian government is thus going to have some very tough decisions to make. How will it try to mobilize real international support, not just expressions of sympathy for the deaths and destruction? In what ways can it seek to destroy terrorist installations and deter their sponsors?

Israel’s experience offers some lessons: depend on yourself, be willing to face unfair criticism to engage in self-defense, take counter-terrorism very seriously, mobilize your own citizens as an active warning system, and decide when and where to retaliate.