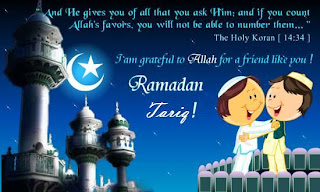 No, Henrik Clausen is not talking about that crafty word weasel, Tariq ‘Taqiyya’ Ramadan, but about the Muslim fasting ritual from which Tariq draws his sir name.

I received the news of this article about the same time the Baron did, but I will give him the full credits for publishing before the TT did. (I have been busy with something else ove the past few days so forgive me). KGS

B.Bodissey: “Henrik Ræder Clausen of Europe News has posted an informative article about Ramadan at Jihad Watch. With his permission, I am republishing it here.”

I will put up just a portion of it due to its length, follow the rest of it at the GoV or at Jihad Watch who had it first.

Ramadan is, originally, one of the four holy months of Arab paganism, but is today, along with the fasting ritual, one of the five pillars of Islam. In these months, Arabs would abstain from bloodshed and plunder, postpone any outstanding acts of revenge, and if possible perform the small pilgrimage (Umra) or the large (Hajj) visiting Mecca to worship Allah and the other gods of the Kaaba. Ramadan was not originally tied to fasting. It is worth the effort to examine the historical background of Ramadan fasting and the Eid festival. This gives the required context and leads to an understanding of just how important Ramadan and Eid are to the Islamic tradition. [1]

Bukhari:V1B2N50: ‘It means:
Waitaminute…Where did the booty enter the picture? That is not very religious, at least as seen from a Jewish/Christian perspective (“You shall not steal”). And where did the Hajj (pilgrimage to Mecca) go? No holy person would think like this. Fortunately, the (Sunni) tradition has a different view of the five pillars, also based on Bukhari:

That’s better. We will ignore the contradictions of the hadith, rely on the tradition, and look at details of the fourth pillar.There is plenty of literature and articles about Ramadan fasting, its purpose and its execution. This one is representative and clear:

Ramadan (the ninth month in the Muslim year) is the month of fasting. It is one of the most important months in the Islamic calendar because it was during Ramadan that the Qu’ran was first revealed to the Prophet Muhammad (PBUH). Also the first battle between the idol worshippers of Mecca and the Muslims of Medina took place during this month. The result of the battle was a devastating defeat for the invading army from Mecca, and a glorious victory for the Muslims of Medina. It is knows as the Battle of Badr. [2]

Note in particular the reference to the Battle of Badr. This is what makes Ramadan different from the other three ‘holy’ months and is a subject we shall return to.
The idea of fasting has been present in various forms in almost all religious systems. In Mecca, fasting not being part of Arab pagan religion, there was little inspiration regarding fasting to draw from, and Muhammad never mentioned it in any form. Muhammad in Mecca was more preoccupied with his squabbles between Muhammad and his Quraysh over his religion. The pagan Arabs, who had worshipped Allah and the other stone idols in the Kaaba for generations, (al-Tabari VI pages 19 ff [3]) did not like that Muhammad brought along a different religion. That had good reasons:
Being custodians of the Kaaba, they were also overseeing the pilgrimages from other parts of Arabia, where pilgrims would come for the smaller Umra pilgrimage or the larger Hajj pilgrimage, which includes the still-familiar rituals of [running, stoning, touching black stone, animal sacrifice]. The constant inflow of pilgrims provided the otherwise quite barren area around Mecca with vital income. The fact that Muhammad was scorning the religion of their grandfathers, potentially destroying their livelihood, was unsettling.
Were the Arabs worshipping Allah before the time of Muhammad? Indeed. As noted in the footnote on page 2 of al-Tabari VI, they did so, as also recorded in the Quran (29:61, 39:38 etc.), and indicated by pre-Islamic use of the name ‘Allah’. Even Muhammad’s’ father was named Abdallah, which translates into ‘Slave to Allah’. Since the generic Arabic word for ‘god’ was Ilah, Allah might be a contraction of Al-Ilah, meaning ‘The highest god’. In any case, worship of Allah was widespread for generations before Muhammad. More here. KGS
Making Sense of Ramadan (PDF)