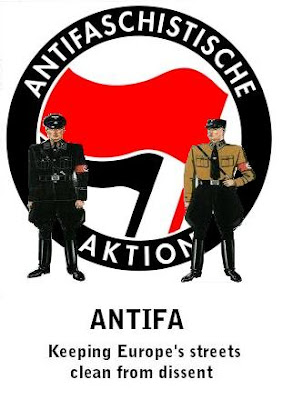 These people really mean business, check out what the Baron has over here on them, they are a bunch of Goons, loons and baboons all rolled in one.

The Storm Troopers of Malmö
by Baron Bodissey


While we were concentrating so hard on Cologne last weekend, another conference with an accompanying march was going on, this one in southern Sweden. Thousands of people converged on Malmö for the “European Social Forum”, but since they were all anarchists and other assorted leftist anti-Semites, their demonstrations were not prohibited by the police.Being anarchists, however, riots were de rigueur, and they battled with police. To reprise the news as posted on last Saturday’s news feed:

Clashes between police and demonstrators broke out on Friday as Malmö played host to the European Social Forum. Rocks were thrown at police, windows were broken and a woman was raped as 800 people demonstrated to highlight climate change.The European Social Forum, an annual event, carries the slogan “another Europe is possible” and some participants displayed their disgust at the current world order by resorting to violence on Friday.Around 100 protesters threw rocks at police and broke windows on Friday at a demonstration near the Triangeln shopping mall in the centre of the southern Swedish city. 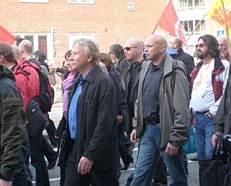 A reader in Sweden sent us some photos and a brief account of the events in Malmö. I don’t know the original source of these photos. Ilmar Reepalu, Socialist #1, the mayor of Malmö [at right, with blue shirt].

Surrounding him were SÄPO (the security police), and fifty meters back came Antifa (Antifascistisk Aktion), his Storm Troopers:

(TT: Check out the rest of the pics, black shirts and all. Socialists are what socialists do, as did their mentors Mussolini and Hitler.) 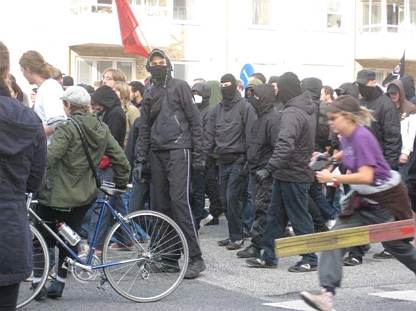 These people are playing for keeps, they ain’t messing around. 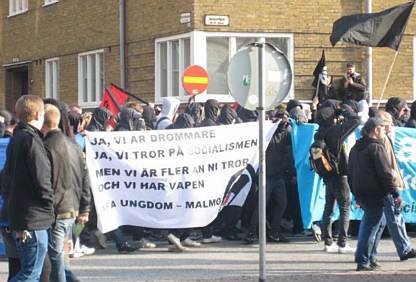 The banner reads: “Yes we are dreamersYes we believe in socialismBut we are more numerous than you thinkand we have weaponsAFA Youth Malmö (AFA=Antifascistisk Aktion) “

MORE ON COLOGNE! The Baron also publishes the latest report from one of the Jewish participants to the rally that was beaten up by ANTIFA thugs who yelled at him “Nazi RAUS!”

I reported last weekend on the experiences of Aviel at the Pro-Köln fiasco in Cologne. He was beaten up by the leftist Storm Troopers; as he reports, “I was wearing my Kippah and readily identifiable as a Jew; however, they screamed at me ‘Nazis Raus’.”Aviel has recovered enough to send in a report with photos. Here’s what he said about the photos:

Here is my report. I have attached a couple of photos. The first photo is rather disturbing. It shows a band of some sort of humans preventing the police from moving about. I find it odd that even they were powerless to deal with that lot. However, I think that they were probably just unwilling.

The second photo shows the police actually escorting Antifa and other scum into the city before pulling back. I think this photo tells more than many others. 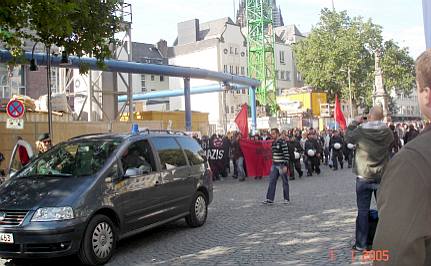