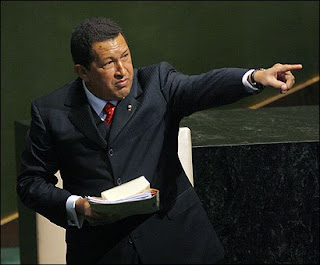 “They’re trying to here what they were doing in Bolivia,” Chavez said. “That’s enough … from you, Yankees,” he said, using an expletive.

Chavez announced the decision during a televised speech, hours after saying his government had detained a group of alleged conspirators in a plot to overthrow him. Chavez accused the group of current and former military officers of trying to assassinate him and topple the government with support from the United States. He didn’t offer evidence. U.S. officials have repeatedly denied Chavez’s accusations that Washington has backed plots against him.”

The world’s den of thieves and useful stooges in love with Hugo Chavez. He loves to “Hug-o” his fellow “thug-os” and “simpleton-os”……. 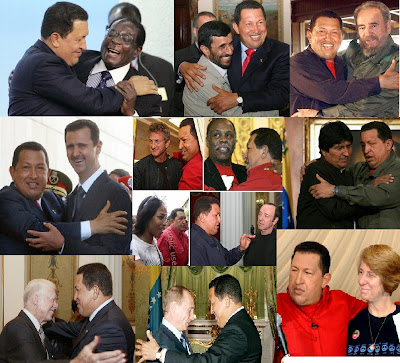 Also, Russia and Chavez up the ante with the arrival of two Russian bombers to Venezuela.

MOSCOW (al-Reuters) – Two Russian long-range bombers capable of carrying nuclear weapons will return to base from Venezuela in four days, the Air Force was quoted by Interfax news agency as saying on Thursday. The bombers, known in the West by the NATO codename “Blackjack,” were not carrying nuclear weapons during the flight to South America and will return to Russia on September 15, Air Force commander Vladimir Drik told Interfax.”More here. KGS