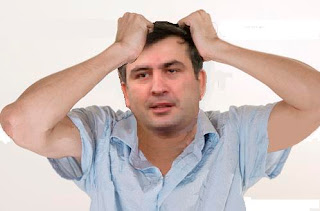 It wasn’t supposed to be like this! Georgia failed to “seize the Tskhinvali approach” and the venture has turned sour.

While the Tundra Tabloids supports true democracy minded individuals like Saakashvili, and loathes anti-democratic machinations and strong arm tactics of Vladimir Putin, the TT has to concede the point that, Georgia has been badly misled by its elected leader, Mikheil Saakashvili.

To put it bluntly, Saakashvili blew it. Over at the Brussels Journal, Joshua Trevino lays it out just how badly the Georgians misstepped, and how things could have prevailed if the Georgians had a more savvy of a leader at the helm.

Brussels Journal: “The first thing to understand about the war between Russia and Georgia is that Georgia has lost. As Doug Muir explains, seizing South Ossetia required the quick severing, and then holding, of a single key route leading from the Caucasus peaks to the South Ossetian capital of Tskhinvali. A look at the terrain tells the tale:

Tskhinvali’s north side is to the mountains, and its south faces toward a broad plain in which the Georgians already controlled the major routes. As an operational problem, the solution was self-evident. Seize the north-south route to Tskhinvali, and the conquest of South Ossetia resolves into an exercise in alpine insurgency – unpleasant but winnable.

The Georgians did not get it done. Having failed to seize the Tskhinvali approach, the next best option is to interdict its traffic. Russian air power, which appeared to have a Georgia-wide romp in the past 24 hours, almost certainly renders this impossible. Here, then, is the circumstance that the Georgians face: their warmaking assets will only decline (the hasty recall of Georgia’s Iraq contingent notwithstanding), while Russian power in-theater will only grow. Georgia’s military has benefited from significant American training and equipment since 2002 – but it simply does not have the manpower to face down a Russian Army accustomed to victory through sheer mass.

The real question for Georgia, then, is not whether is will win or lose – it has already lost – but how bad its loss will be. The worst case scenario is a Russian occupation and annexation. Fortunately for the Georgians, that’s also the least likely. Less unlikely is some sort of Russian occupation coupled with a Russian-driven regime change that puts Georgian President Mikheil Saakashvili on the street – if he’s lucky. This might not be the tragedy for Georgia it seems, given Saakashvili’s rather astonishing incompetent gamble in leading the country into the present war.

Most likely is that the Russians fully occupy South Ossetia, along with the other secessionist region of Georgia, Abkhazia; declare them both independent or somehow annexed; and thoroughly punish the Georgians with a countrywide air campaign targeting what meager infrastructure there is. Georgia at war’s end – which may well be mere days away – will be definitively dismembered, and smoldering in body and heart.