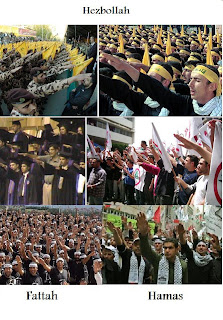 Though Hezbollah’s infrastructure was dealt a serious blow by Israel during the 2006 war, two years later, Hezbollah still sounds a defiant voice over its intentions of liberating, yet more land held by Israel.
YNET: ” A senior Hizbullah commander says that while the group does not seek war with Israel, it is ready for one and is stronger than before. Meanwhile, Lebanon’s national unity government agreed on a statement that political sources said grants Hizbullah the right to use all possible means to liberate “occupied land.”

The policy statement, expected to be approved by Lebanon’s cabinet Monday, recognizes the right of Lebanon, its government, people and resistance to use all means possible to regain Lebanese sovereignty over Shebaa Farms and nearby Israeli-held parts of Ghajjar village.”

Clue: No matter what Israel does, like Hamas, the Hezbollah will always find a new pretext for being at a continual state of war with Israel, for them to do otherwise would lead to their own demise.
One mistake often made by Middle-East armchair analysts is the refusal to take the words of the Arabs seriously, often more than not, they fall back on the default position of: “no, they can’t really mean what they say”, in spite of repeated history. While some may claim that the Hezbollah are down and out, it’s still highly probable that they no longer fear Israel as much as they once did, or still should.
A reason for concern, is that the Arabs are notorious for not only projecting a highly distorted image of their potential power and military abilities, but that they also seriously believe in their own propaganda. That is something that needs to be factored into any policy making vis-a-vis the West and the Arab states.
While to a western eye the rhetoric coming from a leader of Hezbollah or Hamas over what they intend to do, appears to be nothing more than political “grandstanding”, for the locals, it very well represents what they intend to do, given the right opportunity. When fanatics place their future in the hands of their religious deity, you can be assured that logic, reason and common sense doesn’t factor to high on their list of priorities.
Remember, many of these people actually believe that drinking camel urine is a magic elixir, or that a wife wearing her husbands pants can indeed become impregnated. So when the Lebanese government officially sanctions Hezbollah’s view of “liberating more land from Israel (Shebaa Farms and nearby Israeli-held parts of Ghajjar village), you can be assured that they intend to do just that, but only when the timing is right.
If Israel acts against Iran’s nuke facilities, it’s not unlikely that the Hezbollah would use that as a pretext an attack Israel, once again in the same fashion, but this time having even longer range missiles in their arsenal. Seeing that the Hezbollah, Hamas and Fattah are Islam-O-Nazis, it stands to reason that there intentions are not built on solid, rational thinking, but upon pure hatred of the Jews. So how is it that the West deems such a mentality as something worth reasoning with? *L* KGS