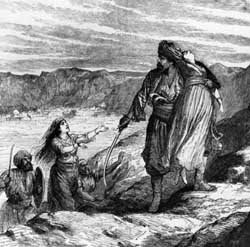 It was only a week ago last Tuesday, when the story broke concerning 17 maids who were rescued by the Belgian police from slavery to a royal family who were visiting from the United Arab Emirates.
Well now the Human Rights Watch people (finally something to positive to write about them) have come out against the institution of slavery within the Saudi kingdom.
al-BBC: “It says some cases amount to slavery, with employers going unpunished for withholding wages, forced confinement, or physical and sexual violence. HRW says some workers are imprisoned or lashed on spurious charges such as theft, adultery or witchcraft. Thousands take shelter with the Social Affairs ministry or foreign embassies. […]
Human Rights Watch recently campaigned on behalf of an Indonesian maid whose employers had charges against them dropped after severely abusing her. Nour Miyati, 25, contracted gangrene after allegedly being tied up for a month and left without food in 2005. She had to have several fingers and toes amputated. Human Rights Watch said the ruling “sends a dangerous message to Saudi employers that they can beat domestic workers with impunity and that victims have little hope of justice”. Rights organisations say many foreign domestic maids in Saudi Arabia work in harsh circumstances and often suffer abuse by their employers.”

: “Islam permits the taking of slaves as “booty” or as a reward for waging jihad. Slavery became a Muslim tradition at the time that Mohammed moved to Medina and amassed sufficient power for the enslavement of non-Muslims. Slavery is an accepted part of Islamic society and is never viewed in a negative way in the Koran, Sira or Hadith. In fact, it is a God-given right for Muslims to have slaves.[6:7] Allah has given more of His gifts of material things to some rather than others. In the same manner, those who have more do not give an equal share to their slaves so that they would share equally. Would they then deny the favors of Allah.

So there you have it folks, the hardly ever mentioned reality that continues to exist in the Islamic world, due to the supposed infallibility of Mohamed’s Qur’an. Islam in its purest form is totalitarian, cruel, anti-human/civil rights and shouldn’t be allowed to exist in that form anywhere on the planet. *L* KGS