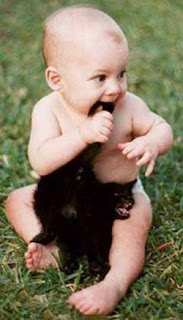 Where would we be without those government sponsored organizations?

The guide, titled Young Children and Racial Justice, warns adults that babies must also be included in the effort to eliminate racism because they have the ability to “recognize different people in their lives.”The bureau says to be aware of children who “react negatively to a culinary tradition other than their own by saying “yuck”

Well that most certainly leaves the kid in the picture off the hook. Or does it?

But ladies and gentlemen, seriously, please observe the cheese-headed logic of those that wish to mold and groom our youth into the ideological Politically Correct way of thinking, in order to make them into the ideal citizen. The author of the PC book “Young Children and Racial Justice” sees in a child’s reluctance to put something “foreign” in its mouth as a potential racist act, but such logic immediately runs into a problem, seeing that kids stick foreign stuff into their mouths all the time.

Kids stick pebbles, crayons and live animal appendeges into their mouths all the time, even their own feet! The shock, outrage and the horrors of it all! Are the parents thus guilty of subconsciously, or worse yet, intentionally instructing their kids with this kind of unbalanced behaviour? The PC mandarins would like you to believe that their view of how the world should be, and can be, is the way forward, which means more governmental PC intrusion into our daily lives. Jane Lane, author of the book in question states:

“Children are like sponges and the early years of their lives are critical for helping them learn to respect the opinions, differences, similarities and needs of others.”

Thanks to Debbie Schlussel for posting the following quotes that sum up the situation as a whole. The PC mandarins would like nothing better than to indoctrinate the youth with their half-baked notions and outright stupid ideals. It’s something we have seen tried, time and again, by the other same minded utopians throughout history.

Give me four years to teach the children and the seed I have sown will never be uprooted.
–V. I. Lenin

The education of all children, from the moment that they can get along without a mother’s care, shall be in state institutions at state expense.
–Karl Marx

Education is a weapon, whose effect depends on who holds it in his hands and at whom it is aimed.
–Josef Stalin

Enough said. *L* KGS
UPDATE: There’s more! The author quotes Michelle Obama, wife of B.Hussein Obama, Democrat nominee for US president!
Jane Lane: “As Michelle Obama, wife of the US Democratic Presidential nominee, says: ‘Real change comes from having enough comfort to be really honest and say something very uncomfortable.’Jane Lane, author of Young Children and Racial Justice.”
This is the woman who recently stated that she’s finally found something to be proud of in America, her husband running for office. This is the same woman who sat in a racist church year after year while “whitey” was blamed for all of the ills in the world. The same woman and her husband who sat year after year in a church, run by a pastor who fawns over a racist Muslim minister/leader, Luis Farrakhan who is an anti-Semite.
The circle of stupidity has completed itself.