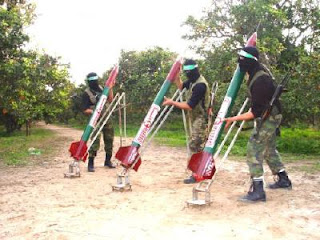 It was to be expected, for all “truces” with a sworn ideological enemy is doomed from the very beginning, it’s just a matter of when, not if.

JERUSALEM – Palestinian militants on Tuesday fired three homemade rockets into southern Israel, the first such attack since a cease-fire between Israel and Gaza militants took effect last week. Israel condemned the attack as a “gross violation” of the truce, but did not say whether it would retaliate.
The barrage wounded two people and capped a day of violence that presented the truce with its first serious test. Just before midnight, Palestinian militants fired a mortar shell into an empty area in southern Israel. And in a pre-dawn raid, Israeli troops killed two Palestinians in the West Bank city of Nablus.
Islamic Jihad, a small armed group backed by Syria and Iran, claimed responsibility for the rocket fire. Although the West Bank is not included in the truce, the group said the Nablus raid had soured the atmosphere of calm.
So there you have it folks, “truce” Hamas style. Like Dr.Daniel Pipes stated in Copenhagen this past week, the only policy the Israelis need to be implementing vis-a-vis the Palestinians, is the one built on deterrence, which means “convincing the Arabs that they will never have what it takes to beat Israel”.
Any other policy not aimed at achieving victory over the Palestinians… is pure appeasement, which is at the heart of the string of failures besetting the Israelis starting with the Oslo period. Time to change gears and opt for a policy that -while not perfect- has been proven in times past to have had a better chance of convincing the Arabs that they will lose each and every time they strike against Israel. More here. *L* KGS