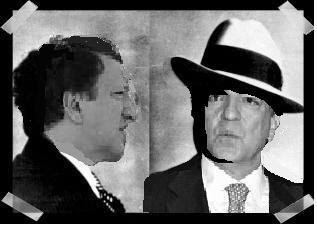 So Barroso “The Don” wants the remaining members to continue the rat-ification process of the “contract”, in spite of the fact that one of their own defied the… ‘understanding’.
al-AFP: “The European Commission believes that the remaining ratifications should continue to take their course,” the EU executive’s chief Jose Manuel Barroso said in Brussels. He added that he had spoken to Cowen, adding that the Irish premier “also believed the treaty is not dead, the treaty is alive … He was clear that this vote should not be seen as a vote against the EU.”
A warning to the Irish, I’d watch out for a legislative ‘leg breaking’ in the upcoming months, “The Don” isn’t going to take the recent unwelcome developments lying down, especially after his warning went unheeded.

Translation: “We don’t have a plan-B. We discussed with the other FM’s on Monday and will peacefully follow how the situation develops, said Stubb. He also admitted that the time schedule of the agenda has stayed the same, or that the basic agreement should be activated on 1.1.2009. He doesn’t believe that he agreement will be put under negotiations again.”Got that? NO PLAN-B. It was never a matter of accepting the will of the people, otherwise future negotiations as well as a watered down Plan – B would have been crafted in advance. You see folks, it was never a question of democracy and letting the people decide, the EU elites were going to cram it down our throats come hell or high water.The fact that they are not going to respect the decision of the Irish voters, as well as the rules laid down themselves, that in order for the EU-Lisbon Treaty/Constitution to become law, IT MUST BE RATIFIED BY ALL EU MEMBER STATES. The fact that they are still encouraging the rest of the EU member states to continue ratification, means that they were never serious with their own mandating guidelines that govern EU practices.They’ll soon be trying to maneuver the rest of the Union out of the contract restricts any kind of legislative acrobatics, in order to enforce their will on the rest of us, just wait and see. *L* KGS.