The jihad, been in force ever since the dawn of the warlord Mohamed…

The Christian crisis in Indonesia’s Papuan Provinces is not caused by a lack of religious freedom. Rather, it has its roots in the racial (Javanese) and religious (Islamic) supremacism which undergirds Indonesian government policy and military action there. Indonesia’s government and military elites make a lot of money exploiting the region’s resources – timber, copper, gold, gas and oil; the military (TNI) also makes lots of money providing security to mining firms. The indigenous people are viewed at best as a problem to be fixed, and at worst as ‘infidels’, ‘blacks’ and ‘monkeys’ to be subjugated and if necessary eliminated! The Indonesian government hides the situation behind a Jungle Curtain of secrecy. Furthermore, because friendship with Indonesia affords economic and geo-strategic benefit, the supposedly human rights-defending West turns a blind eye. 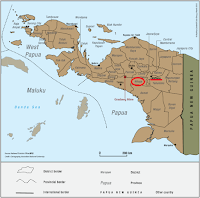 Perched in virtually inaccessible territory, Nduga Regency in Papua’s Central Highlands was cut off from the outside world until missionaries in aeroplanes arrived well into the 20th century. Remote and isolated, Nduga has remained staunchly resistant to Indonesian rule. It can be a dangerous place, not just for the TNI (who are viewed as predators), but for Papuans from other regions (who are viewed with suspicion). Welcome is reserved for the Church, which has blessed the Ndugans with education, health care, grace and new life in Jesus Christ. In December 2018 Papuan rebels abducted and executed nineteen Indonesian labourers in Nduga.

The labourers had been working on the hugely controversial Trans Papua Highway which President Widodo believes will solve all Papua’s problems by facilitating economic development. The Papuans, however, especially the Ndugans, view it as invasive, destructive and simply a means of facilitating further Javanese Muslim colonisation and Islamisation. The Indonesian government’s response to the killings was swift, brutal and wildly disproportionate. Under the pretext of hunting rebels, the TNI ‘swept’ through Nduga, destroying homes and gardens, schools and churches, and displacing some 45,000 Papuans.

Months went by but the TNI operations never ended. Unable to return home and denied access to humanitarian aid, the displaced Papuans started to die. By July 2019 the death toll amongst displaced Ndugans in the camps of Wamena was 139 [RLPB 513 (31 July 2019)].  On 21 January 2020 the Executive Director of Amnesty International, Usman Hamid, reported that the death toll amongst displaced Ndugans – from untreated illness, infected wounds (including bullet wounds) and starvation – had risen to 263. As the death toll rises, President Widodo is facing pressure from Members of Parliament, Human Rights organisations and Church groups – including the Indonesian Communion of Churches (PGI) – to pull the TNI out of Nduga, launch a humanitarian response, and commence serious dialogue.
More here