I care neither for ultra-nationalists nor their open borders equivalents, the supra-nationalists, they both promote agendas that crush the individual and real representative (limited) government…

Notably, these benefits are only beneficial inside the artificial enclosure of EU compliance.  Outside of that artificial policy boundary, they aren’t beneficial in any absolute sense.  In the absolute sense, as British voters declared in the 2016 Brexit referendum, national independence is better.

Governments behaving badly: The battle of our time is being waged right now 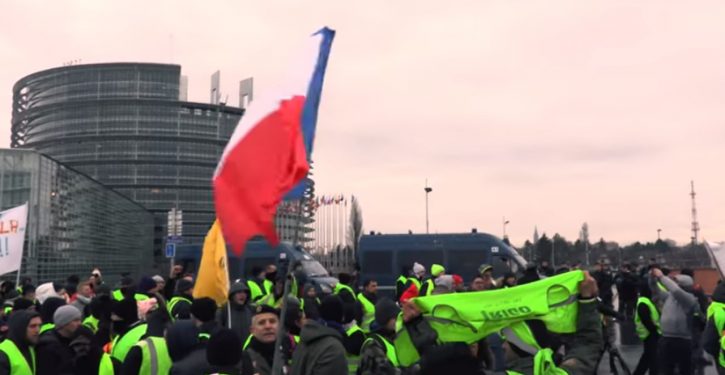 There is a reason the governments of United States, Britain, and France are all paralyzed at this moment by national division. The reason is simple: these symptoms are the battle of our time: the battle between supranationalism, on the one hand, and reliance on the nation-state on the other, as the top-level organizing framework of human politics.

Each case manifests a slightly different facet of the issue. In France, thousands of the people turn out week after week to protest economic policies that have been imposed in service of “climate change” collectivism. These policies, adopted at the behest of the EU, are making it steadily more impossible for Frenchmen and women to earn a living and keep their lives going on a middle-class basis.

For climate-change policy, which seeks to impose universalist “solutions,” that’s a feature, not a bug. President Emmanuel Macron has been willing to make minor adjustments, but is unwilling to go further and assert that France should decide these things for herself, rather than being obliged to comply with EU policy.

The French protests, frequently troubled with extracurricular violence from radicals both left and right, are ritually dismissed in the media as evidence of a horrifying extremism. Actual video footage of numerous protests tells a different story: a story of the most ordinary-looking middle-class people from all races and backgrounds turning out across the country, waving the flag of France and singing “La Marseillaise” in unison. But for the mainstream media, there is no civil debate on collectivist belief systems. Anyone who doesn’t agree with the collectivist catechism, on climate change or other matters, is simply an extremist.

Trending: ‘Some white people may have to die’

In the UK, government business ground to a halt in the last week as Parliament rejected Prime Minister Theresa May’s negotiated Brexit deal with the EU. The deal is a very bad one for the Brits, leaving them on the hook for the most onerous obligations of EU membership, while excluding them from the marginal relief of “benefits.”