Sukkot is a weeklong Jewish holiday that comes five days after Yom Kippur. Sukkot celebrates the gathering of the harvest and commemorates the miraculous protection G‑dprovided for the children of Israel when they left Egypt. We celebrate Sukkot by dwelling in a foliage-covered booth (known as a sukkah) and by taking the “Four Kinds” (arba minim), four special species of vegetation.

The first two days (sundown on September 23 until nightfall on September 30 in 2018) of the holiday (one day in Israel) are yom tov, when work is forbidden, candles are lit in the evening, and festive meals are preceded by Kiddush and include challah dipped in honey.

The final two days (sundown on September 30 until nightfall on October 2 in 2018) are a separate holiday (one day in Israel): Shemini Atzeret / Simchat Torah.

The Significance of Sukkot 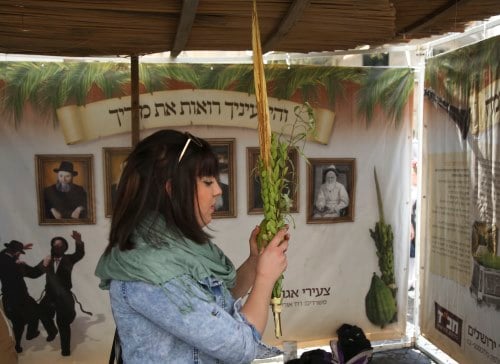 Of all the Jewish holidays, Sukkot is the only one whose date does not seem to commemorate a historic event. The Torah refers to it by two names: Chag HaAsif (“the Festival of Ingathering,” or “Harvest Festival”) and Chag HaSukkot (“Festival of Booths”), each expressing a reason for the holiday.

The name Chag HaSukkot commemorates the temporary dwellings G‑d made to shelter our ancestors on their way out of Egypt (some say this refers to the miraculous clouds of glory that shielded us from the desert sun, while others say it refers to the tents in which they dwelled for their 40-year trek through the Sinai desert).

Dwelling in the Sukkah 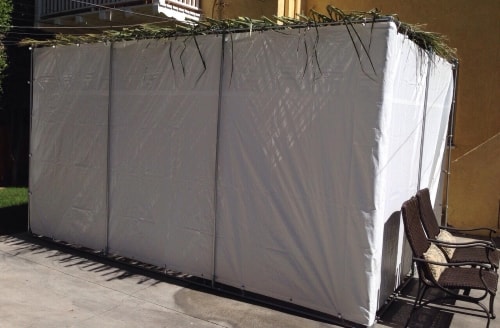 For seven days and nights, we eat all our meals in the sukkah and otherwise regard it as our home. Located under the open sky, the sukkah is made up of at least three walls and a roof of unprocessed natural vegetation—typically bamboo, pine boughs or palm branches.

(Read more here: How to Build a Sukkah)

The goal is to spend as much time as possible in the sukkah, at the very minimum eating all meals in the sukkah—particularly the festive meals on the first two nights of the holiday, when we must eat at least an olive-sized piece of bread or mezonot (grain-based food) in the sukkah. The Chabad practice is to not eat or drink anything outside the sukkah. Some people even sleep in the sukkah (this is not the Chabad custom). 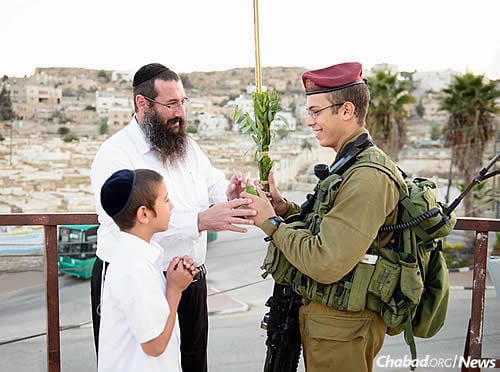 Rabbi Danny Cohen of Chabad of Hebron and his son Shneor offer the lulav and etrog to a soldier during Sukkot. (Photo: Israel Bardugo)

Another Sukkot observance is the taking of the Four Kinds: an etrog (citron), a lulav (palm frond), three hadassim (myrtle twigs) and two aravot (willow twigs).

On each day of the festival (except Shabbat), we take the Four Kinds, recite a blessing over them, bring them together and wave them in all six directions: right, left, forward, up, down and backward. The sages of the Midrash tell us that the Four Kinds represent the various personalities that comprise the community of Israel, whose intrinsic unity we emphasize on Sukkot. 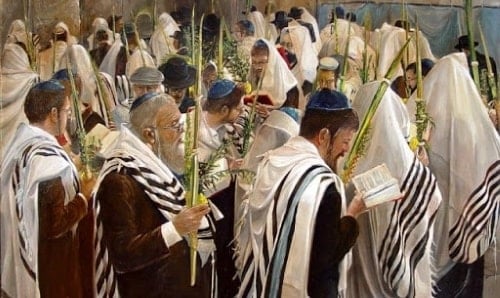 Every day of Sukkot we say Hallel, a collection of psalms of praise (Psalms 113-118) as part of the morning prayer service. Every day aside for Shabbat, we recite Hallel while holding the Four Kinds, waving them in all directions at certain key points in the service, which are outlined in the siddur (prayerbook).

Afterward, we circle the bimah (the podium on which the Torah is read) holding the Four Kinds, reciting alphabetically arranged prayers for Divine assistance known as Hoshanot.

The seventh day of the holiday is known as Hoshanah Rabbah. This is the day when our fates for the coming year—which were signed on Rosh Hashanah and sealed on Yom Kippur—are finalized. On this day, we circle the bimah seven times. We also say a short prayer and strike the ground five times with bundles of five willows (also known as Hoshanot)

Sukkot in the Holy Temple 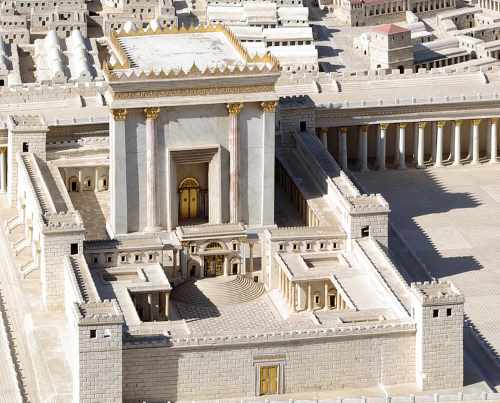 In the days of the holy Temple in Jerusalem, there was a special regimen of sacrifices that were to be brought on the altar. On the first day, no less than 13 bulls, two rams, and 14 lambs were to be sacrificed. Every day, the number of bulls was depleted by one. All in all, 70 bulls were brought, corresponding to the 70 nations of the world.

Along with Passover and Shavuot, Sukkot is one of the Shalosh Regalim, the three annual pilgrimages, when every male Jew was to be in Jerusalem. Every seven years, on Sukkot, the king would read aloud from the Torah to the entire nation—men, women and children. This special gathering was known as Hakhel.