It’s because their tyrannical mindset stems from statist progressive thinking, it finds a natural home within that political ideology…

Enlightenment based conservatism upholds the right of the individual over that of the mob. It rejects identity politics/group rights. It supports the negative rights, safeguarding the individual from an encroaching government. The protection of our unalienable rights. That’s something the racists and Nazis reject, as well as members of the Left. 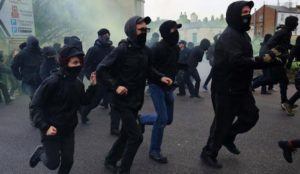 It’s almost like Catholics going to confession. And like baptised Catholics, they’re welcomed into the fold and all is forgiven (I’m using Catholicism as an analogy of an organization and an ideology that people would adhere to, not at any point saying the Church is full of racists and Nazis).

Tommy Robinson has never been allowed to surmount any of his past wrongdoings (I believe “mortgage fraud” is the favourite one to throw at him, now that it’s proven without a shadow of a doubt that he’s no racist.)

Meanwhile, Matthew Collins, self-proclaimed “Paki-basher,” is a researcher and writer for Hope Not Hate. There are some things from which there should be no return, such as Matthew and his gang entering a community centre that was filled with Pakistani women with the sole intent of causing the women as much physical harm as possible. One pregnant lady had to lock herself in the toilet from Matthew and his mates. And yet Matthew managed to gain for himself a senior position at Hope Not Hate. So here you have a misogynistic, woman-beating racist ending up with quite a good career and a book out of it. Bearing in mind that Hope Not Hate are a group who have allegiance with Antifa, and who put out calls to violence against people or groups whose speech they are terrified of.

Appeasement of the Left is the order of the day in the UK. I’ve been to rallies and events and had lefties charge me for pointing my phone in their direction (which is perfectly legal to do, but they don’t like having their picture taken for some reason, perhaps they’re not photogenic enough). The police response was to tell me to move along, even although I was the peaceful one. I challenged the officers and told one that he should be making arrests and not allowing thugs to be dictating people’s behaviour and destroying property. If a person has a long enough criminal record, then they’ll find it hard to find or keep a job, but the police can’t be bothered doing the paperwork. A female officer agreed with me, but again she pleaded with me to go away so that she could keep the peace.