A definite deflation of the Tory ‘remainers’ ill fated balloon… 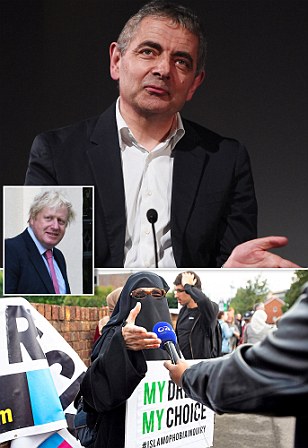 Mr Johnson (inset) is facing an investigation and could be disciplined by Conservative party bosses after saying women in burkas looked like ‘letterboxes’ and ‘bank robbers’. Atkinson (top), 63, said: ‘

As a lifelong beneficiary of the freedom to make jokes about religion, I do think that Boris Johnson’s joke about wearers of the burka resembling letterboxes is a pretty good one.’

The actor, known for his comedy performances in Blackadder and Mr Bean, wrote in a letter: ‘All jokes about religion cause offence, so it’s pointless apologising for them.

You should really only apologise for a bad joke. On that basis, no apology is required.’ Atkinson has previously argued in favour of a ‘right to offend’, saying in 2004 that proposed religious hatred laws would silence ‘creative thinkers’.