Let him know just how you feel about his disgusting suggestion…

Toivo Laitinen, who calls himself a communications expert, posted on Facebook Thursday, that Trump should be shot. 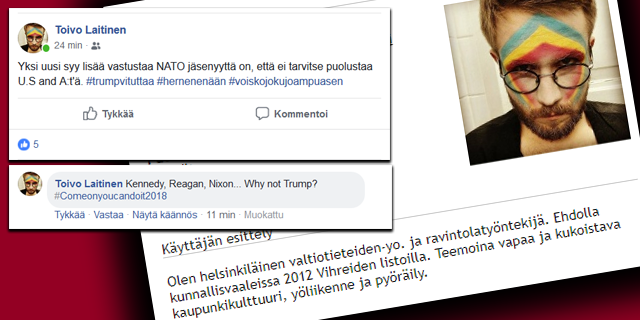 In the first post on Laitinen wrote “Fuck Trump“, “pissed off about him” and “could someone shoot him already .” In another message, he referred to the earlier presidents: “Kennedy, Reagan, Nixon … why not Trump”. 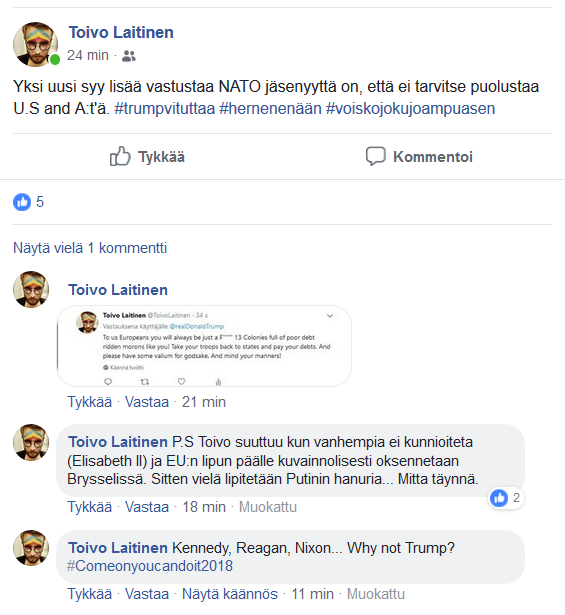 John F. Kennedy was shot dead in Texas in 1963, Ronald Reagan had an attempted assassination of himself in Washington in 1981. There were many conspiracies to kill Nixon.

Laitinen also tweeted to Trump a text with a clearly indignant tone.

According to his Twitter profile profile, Laitinen is a communications expert working with Forum Virium, a Greens Party activist, as well as a political analyst and a Political Scientist.

Laitinen’s post had time to be online for about half an hour, after which it went missing.

Less intelligent messages can have consequences

Sometimes, in social media, more or less serious writings have been seen wishing for the deaths of state leaders. Some of them lead to nasty consequences.

He was immediate fired because of his off the cuff remark.