Just remember that Lebanon was the first Christian majority country in modern times in the ME that was emptied of its Christians during the civil war started by the PLO/Arafat. of the 11 million Lebanese fleeing the country, over 80% where Christian. Now the country is a defacto Islamonazi run regime, and that direction was championed by Europe. The WCC, well it offers nothing but vapid platitudes when forced for a comment on the genocide of their co-religionists in the ME. 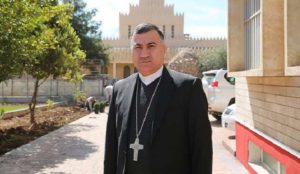 Iraqi Archbishop Bashar Warda made the following observation during a recent speech: “Having faced for 1,400 years the slow-motion genocide that began long before the ongoing ISIS genocide today, the time for excusing this inhuman behavior and its causes is long since passed.”

That Muslims have cleansed non-Muslim peoples by the sword since the seventh century to the present is of course factually well-documented. But what of the more subtle “slow-motion genocide”? How does that work? The answer is connected to another question: Why did so many non-Muslims become Muslim in the first place?

Many modern-day Muslims and Western apologists claim that the ancestors of today’s 1.5 billion Muslims converted to Islam due to its intrinsic appeal; that the modern day coercion and persecution committed by the Islamic State and others is an aberration.

Because well-documented facts have little influence on the modern West’s ahistorical sense of reality, happily the exercise of common sense validates what history records: the Islamic world is built atop, not so much the physical genocide of infidels, but the spiritual and cultural genocide of their identity. This killing of two birds with one stone was always more advantageous for Islam; for while the non-Muslim’s former religious/cultural identity is purged, his body remains to strengthen the ranks of Islam.