Once again, whatever your views are on Martin Sellner’s, Brittany Pettibone’s and Lauren Southern’s politics, they should NOT HAVE been barred and detained like common criminals for their political views.

Understanding that point, is first and foremost, crucial in understanding the basic fundamentals of democratic pluralism, of liberty and of unalienable rights. If you can’t get your head past that, then there’s nothing I can do for you. 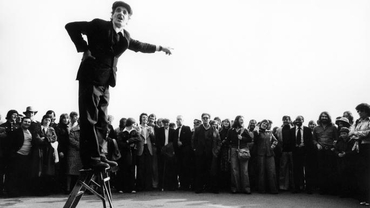 Programming note: Today, Monday, I’ll be back behind the Golden EIB Microphone for three hours of substitute-host-level Excellence In Broadcasting sitting in for Rush on America’s Number One radio show. The fun starts at 12 noon Eastern/9am Pacific. Hope you’ll dial us up either via the iHeart Radio app or on one of over 600 stations across the fruited plain.

~I’m not sure what’s on the rundown for today’s show, but some stories are just ongoing, day by day, remorselessly. For example, free speech is now so imperiled in much of the “free world” that simply scheduling a debate on a controversial subject will attract the attentions of the mob – and by “controversial subject” I don’t mean Islam or abortion or gay marriage or climate change; a debate on the subject of free speech is now so provocative that, as I noted the other day, the “progressive” thugs will descend to break it up, throw smoke bombs, smash the windows of ancient listed buildings, and put the security guards in hospital.

As repulsive as these goons are, the reaction of officialdom is worse: They take the side of the mob, and thereby incentivize them. For example, Martin Sellner (of the Austrian wing of the European “hipster-right” movement Generation Identity) was originally scheduled to speak at a British free speech conference organized by UKIP’s youth branch. However, this was canceled “due to security threats from the far left“.

So, instead, it was arranged for Herr Sellner to give a speech at Speakers’ Corner at Hyde Park in London. Speakers’ Corner has been a global symbol of free speech for a century and a half: Marx and Lenin both spoke there, and George Orwell and Marcus Garvey, and the first generation of African nationalist leaders such as Kwame Nkrumah. If I recall correctly, the only form of speech prohibited there was “insulting the Queen”, but in a 1999 court decision Lord Justice Sedley removed even that genteel restraint.

Nevertheless, flying in from Vienna to give a speech on the very subject for which Speakers’ Corner is famous – freedom of expression – Herr Sellner and his girlfriend Brittany Pettibone were detained upon the arrival of their flight on Friday. After twelve hours of separate detention at Luton Airport, the UK Border Force then moved them at 1am on Saturday to the main detention facility at Heathrow.

Austria is a member of the European Union, as is (almost two years after the Brexit vote) the United Kingdom. There is supposed to be freedom of movement between EU member states – Austrians, for example, have the right to work in the UK. Yet the same “Border Force” that breezily waves through the family of the Ariana Grande bomber, and the Parsons Green Tube terrorist, and the jihadist loon who killed a Japanese man in Dundalk will not even permit Mr Sellner and Miss Pettibone to set foot on UK soil to give a speech on free speech for fear that such an exercise of free speech might be too provocative to those who revile it.

So much for freedom of movement within the EU. What about freedom of movement within Her Majesty’s Dominions? Lauren Southern, formerly of The Rebel and a Canadian subject of the Queen, has just been denied entry to the UK by Home Secretary Amber Rudd on the grounds that she represents “a threat to the fundamental interests of society and to the public policy of the United Kingdom“.