An original translation of the interview in Bild’s print edition of today thanks to Vlad Tepes:

Viktor Orbán to German press: “We do not view these people as Muslim refugees. We view them as Islamic invaders.” 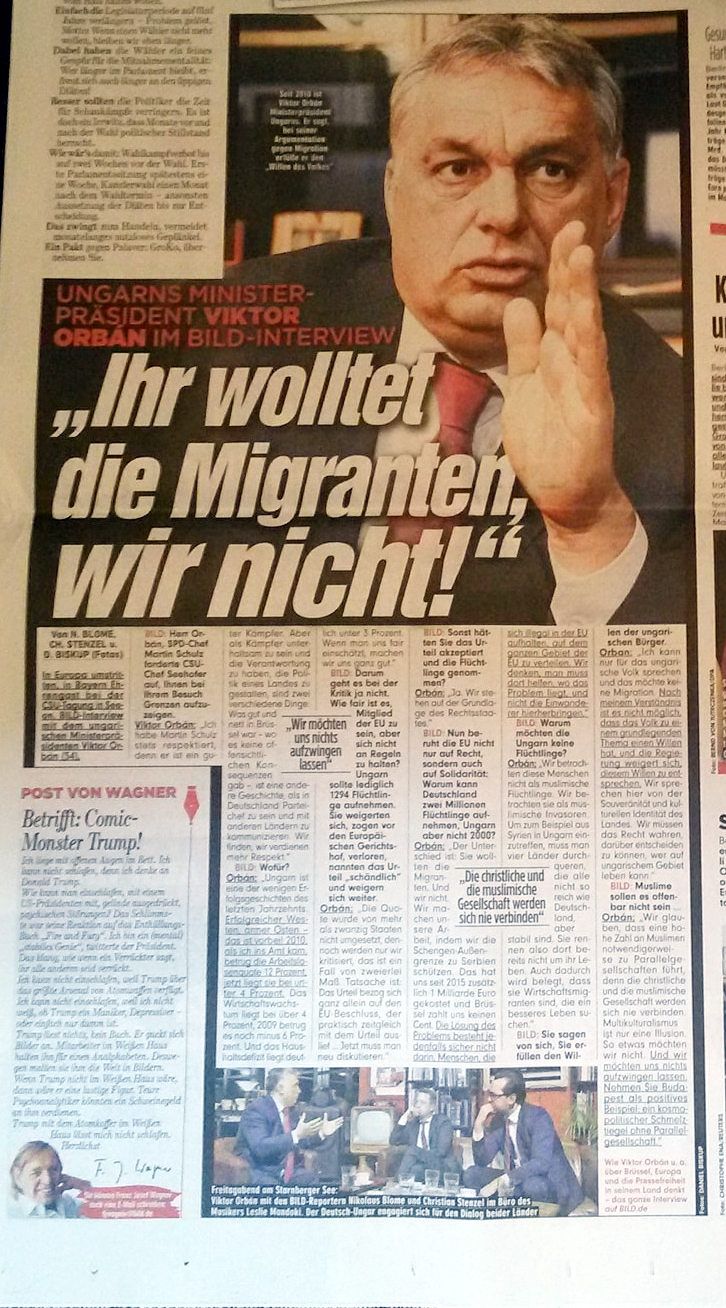 Hungarian Prime Minister Viktor Orbán in an interview with BILD

“It Was You Who Wanted The Migrants – Not Us”

He is controversial in Europe, but guest of honor in Bavaria, at the CSU convention in Seeon. Bild interview with the Hungarian Prime Minister Viktor Orbán (54).

Bild: Mr. Orbán, Social Democrat chief Martin Schulz demanded that the CSU chief Seehofer should put you in your place.

Viktor Orbán: I have always had great respect for Martin Schulz, because he is a good fighter. But to be amusing as a fighter, and to carry the responsibility for shaping the politics of a country are two different things. What was fine and nice in Brussels – where there are no visible consequences – is a different story than being the chief of a party in Germany and communicating with other countries. We think we deserve more respect.

“We do not want to be coerced”

Orbán: Hungary is one of the few stories of success of the last decade. Successful West, poor East – those times are over. 2010, when I went into office, the unemployment rate was 12 percent. Now, it is 4 percent. The economic growth is more than 4 percent, 2009 it still was minus 6 percent. The household deficit is notably lower than 3 percent. If you fairly assess us, we are doing quite well.

Bild: But that is not what the criticism was about. How fair is it, to be a member of the EU but not to stick by the rules? Hungary was supposed to accept only 1294 refugees. You refused, went to the European court, lost, called the verdict “a shame”, and still refused.

Orbán: More than 20 states did not adhere to the quota, yet, it is only we who are being criticized, this is a case of applying double standards. The fact is that the verdict only referred to the EU resolution that basically expired at the same time… there must be new discussions.

Orbán: Yes. We stand on the basis of the rule of law.

Bild: But the EU is not only based on law, but also on solidarity. Why can Germany accept 2 million refugees, while Hungary can’t accept 2,000?

Orbán: The difference is: It was you who wanted the migrants. Not us. We do our job by protecting the Schengen outer border with Serbia. This has cost us about 1 billion Euros additionally since 2015, and Brussels is not paying a single cent for that. The solution to the problem certainly isn’t to distribute people, who reside in the EU illegally, across the whole EU territory. We think one should help where the problem lies, and not take immigration here.

Orbán: We do not view these people as Muslim refugees. We view them as Islamic invaders. For example, in order to arrive in Hungary, from Syria, you have to cross four countries, all of them not as rich as Germany, but stable. So, already there, they aren’t running for their lives. This, too, proves that they are economic migrants, looking for a better life.

Bild: You say that you represent the will of the Hungarian people.

Orbán: I can only speak for the Hungarian people, and they don’t want migration. According to my understanding, it is not possible that the people have an opinion about such a profound topic, and the government refuses to act accordingly. We are talking about the sovereignty and the cultural identity of the country. We need to reserve the right to decide who can live on Hungarian territory.

Orbán: We believe that a high number of Muslims necessarily leads to parallel societies, as Christian and Muslim society will never blend. Multiculturalism is just an illusion. We don’t want such a thing. And we don’t want to be coerced. Take Budapest as a positive example: a cosmopolitan melting pot without parallel societies.

How does Viktor Orbán think about Brussels, Europe, freedom of press in his country – read the whole interview on Bild.de.

The full interview in German is here, you will need a monthly subscription to read it.
Bild is the largest German-language newspaper, the best-selling non-Asian newspaper, and has the eighth-largest circulation worldwide.