I’m just asking the question here, would love to find out the answer.

If so, then this is a clear and stark example of the Beeb disseminating fake news, activist ‘journalism’ at the expense of the Swedes, for whatever the ‘noble’ reason they might have had. 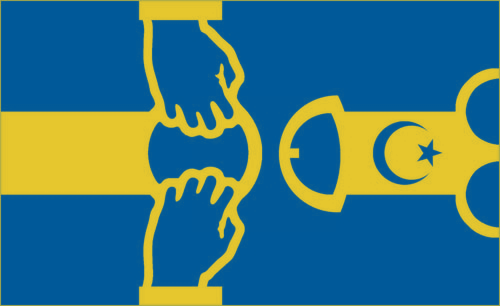 Internet pranksters tried to start a hoax campaign to change the cross on the Swedish flag to a Turkish-style crescent and star. Although a few people were tricked, the lacklustre response to the campaign co-ordinated on 4chan could be a sign that the extreme message board’s influence on internet culture is starting to wane.

The petition on campaigning site Avaaz.org was written in strident, over-the-top language by someone trying to mimic a hard-left activist: “The Swedish flag is a constant reminder of our dark and oppressive past. Refugees and migrants are forced to live under its Christian Cross; a symbol of the Crusades and the slaughter of millions of innocent Islamic lives in Sweden’s past that makes them feel unwelcome and unsafe. Sweden should be a safe space for everyone.”

“BBC journalist Mike Wendling has been implicated in a hoax to create fake news.

He started threads called ‘Operation Swedistan’ with a petition to change the Swedish flag.

After these threads lost steam; the very next day, he wrote an article for BBC trending about how 4chan is weakening, with a case study of ‘Operation Swedistan’

He then came back to brag about how he had “revealed” /pol/ in the MSM, complete with a new petition announcing his arrogance

Wendling has retweeted Media Matters (Brock-Clinton) and is in charge of BBC Trending, a prominent media shaping entity.

BBC have been caught RED HANDED making fake news. They manufactured a story, by posting a fake petition, shilling it on /pol/ and then writing an article about it.

We need to get this out there before the MSM covers it up and their anti-4chan, anti-facts agenda is fulfilled.”

So, what’s the plan?