I’ve said it countless of times, the larger the Islamic/Muslim community, the more likely Jew hatred will increase.

According to the American Anti-Defamation League (ADL), N.Africa and the Middle East, the average country is overwhelming antisemitic (N.Africa 83.5)  (Levant 79.1%) and (W.Europe 22.4)  (E.Europe 33%). It’s plain common sense that if you flood both Western and Eastern Europe with people coming from these areas, harsher attitudes towards (and even violence against) Jews will appear. What that means for Jews living in Europe is a more hazardous living environment.

It’s my personal belief that Jewish congregations everywhere, as well as other minorities that traditionally suffer persecution at the hands of Islamic communities around the world, need to speak up. The need to call a ”spade a spade” is now, before it’s too late to address it. I fully understand not wanting to stick one’s own head above the parapet, especially in this climate where calling out Islamic terrorism will earn you the title of bigot, but Islam itself is entirely anti-Jew. That uncomfortable fact will not go away if never confronted.

The Catholic Church, for all its sins against the Jewish people, finally admitted its role in fomenting Jew hatred, deicide is no longer a part of Catholic dogma. The Catholic Church no longer deems Jews guilty of killing Jesus. So to Islam holds Jews to blame for Mohamed’s death, as well as tossing every known shared negative human trait upon them as well. The Iranians have ‘najis’ purity laws ( I believe the Sunnis have something similar as well) where even the mere touch from a Jew is considered an unclean act.

An open and honest discussion of why extra security measures are needed will help stimulate debate, and hopefully, help pressure the Islamic community into confronting their own hardline taboos, norms, as well as portions of their canonical law that breeds systemic Jew hatred. Dr.Andrew Bostom wrote an entire, well sourced book on the subject, in fact, I gave a copy of the book that Bostom himself personally gave me, The Legacy of Islamic Antisemitism: From Sacred Texts to Solemn History to a former president of the Helsinki Jewish Community, who fully understood then, the dangers that Islamic texts poses.

My hope is that not only the Jewish community, but even more importantly, the Lutheran Church, and other smaller denominations as well, start to behave in a more responsible way and get educated on Islam. The dangers that the Muslim Brotherhood in Finland and throughout Europe poses to us all, is immense. We all need to act in a measured, coordinated way to pressure our politicians to embark on a more rational course vis-a-vis Muslim immigration and Islam in general. Confronting that elephant in the room is the only way forward to securing a better future. For all of us.

Jewish congregation in Helsinki collects funds for security – who is threatening the Jews, only hinted at

According to the Jewish congregation,due to “individuals and groups” in Europe and in Finland, they have had to improve the security infrastructure with large sums of money for years. Which groups are in question, you can find out by studying the statistics yourself. 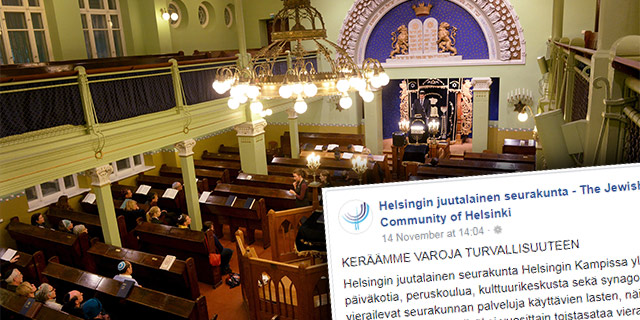 – In the case of any other school, congregation or cultural center, it would not be necessary to control movement in Finland. However, we are not just any other place, the congregation justifies on its Facebook wall .

The Helsinki Jewish Community in Helsinki Kamppi maintains a day care center, a comprehensive school, a cultural center and a synagogue. In addition to children using community services, their parents, young people and the elderly, in addition to 150 children and tourist groups each year.

“It is only through the news that we know that there are individuals and groups in the world, in Europe and in Finland that have caused the Jewish congregation of Helsinki for many years to have a rapid pace in improving their security infrastructure, recruiting security personnel and recruiting volunteers to monitor the safety of people in the community center.

What individuals and what groups are involved? And why does the Jewish congregation in Helsinki have to speak vaguely about anti-Semitism in Europe?

The left is more antisemitic than the right

The study published by the University of Oslo this week on Jewish treatment in France, Britain, Germany, Sweden, Norway and Denmark confirms that in most cases the violence against Jews or threats were Muslim extremists. 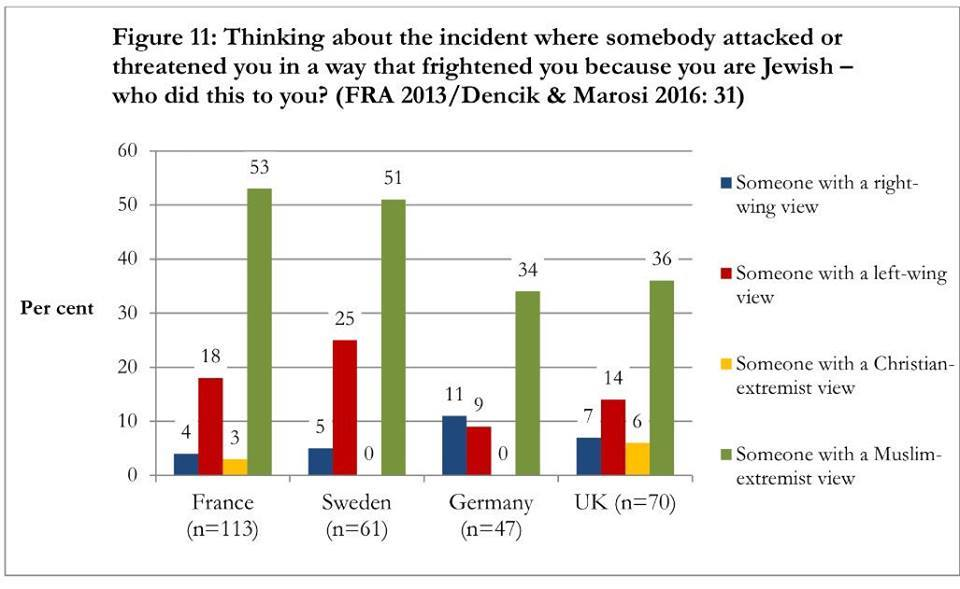 Extremist Christians and the Far-Right were rarely the agents of antisemitism. Instead, for example, in Sweden, 1/4 of all incidents of an antisemitic attack or threat, was by the Left.