The EU is the closest thing Europe has to a fascistic state, oppose it, and it will bring its weight against you…

We’ve posted in the past about a Europe-wide militarized police force called EUGENDFOR (see here and here). The following investigation by Seneca III concerns a new military concordance in Europe in which the armed forces of member states will be subordinate to a centralized command structure. 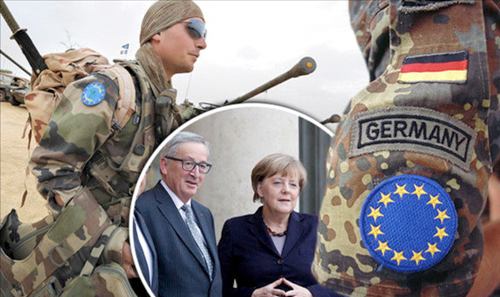 Caveat: Whilst the main thrusts of this article and are intended primarily for UK consumption, particularly with reference to Brexit, it should also be of deep concern to all Europeans, especially European nationalists with an eye on independence and, because of the implications for the future of NATO, it may be of significant interest to Americans and Canadians as well.

Introduction: What is PESCO?

From their own lips:

A broad consensus by all EU Member States on the modalities for launching Permanent Structured Cooperation in the field of defence could lead to a legal decision as early as December, with some 30 projects for concrete cooperation between countries already on the table…

…European Union ministers of defence, meeting informally in Tallinn on 7 September under the aegis of the Estonian Presidency, were in broad agreement on how to move ahead with Permanent Structured Cooperation (PESCO) on defence, paving the way for a legal decision launching PESCO possibly by the end of the year…

…The High Representative pointed out that PESCO was as much if not more about cooperating more as about investing more. What we are offering is a platform for joining investments, joining projects and in this manner, overcoming the fragmentation that is characterising currently especially the environment of defence industry in Europe. In this way, the European industrial framework in the sector of defence will be enormously enabled to play a major role globally, and the European Union would then be, I think, really a credible security provider globally…[1] (My italics, S III)

Yes, quite, and remember…

It is understood that if the UK Government hands over confirmation of their approval of PESCO military integration by the end of November 2017 British military forces will fall into ‘foreign hands’. The matter can then not be overturned until we revert to our Common Law which is precisely what May and the other ‘Remainers’ in Westminster appear to be trying to prevent happening by their delaying tactics, obfuscation and downright sabotage of Brexit, and Brexit is all about one basic question: Who controls Britain?

After 350 years of peaceful constitutional evolution and changes of government, the British people are almost entirely concerned about voting, trade and money, and we risk forgetting the fundamental reality that Parliament’s control over our own armed forces is now at serious risk.

The Hungarians learnt this truth the hard way in 1956, and the Catalonians may well be getting the same lesson rather soon.

What it means for the UK

Already, an Italian General with a remarkable collection of decorations and adornments, Claudio Graziano, has been chosen to lead the European Military Committee.