Official guidelines insist a hate crime must be driven by “hostility”, but when contacted, many UK forces are unable to give a definition of what they mean by “hostility” in the context of hate crimes.

Breitbart London contacted dozens of forces to ask for their working definition of “hostility” and was referred on to the “dictionary definition” which includes “unfriendliness” and “dislike”.

Others referred Breitbart London to national bodies, including the College of Policing (CoP) and the Crown Prosecution Service (CPS), which both admit there is an “absence of a precise legal definition of hostility”, with the latter also referring individual forces onto “dictionary definitions” for the purpose of investigating hate crimes. 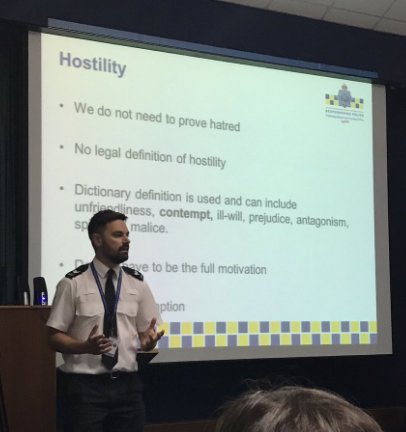 Well lock me the hell up, then.

Dictionary definitions include a wide range of normal human behaviours and emotions, and images on social media suggest police officers are being told to look out for “unfriendliness” as a sign of a hate crime.

The CPS also mentions “ill-will, ill-feeling, spite, contempt, prejudice, unfriendliness, antagonism, resentment, and dislike” as examples of hostility that could be taken from a dictionary.

Many of these emotions are subjective, raising concerns police could target people inconsistently and unfairly, or due to misunderstandings and miscommunications. Others have pointed out “dislike” of immoral things is often honourable.