Jari Taponen, Superintendent, Phd Student, Police College University states on Twitter, that Islamonazis returning to Finland from jihad in Syria and elsewhere, should be allowed to attend public schools just like anyone else. This is a classic example of hardened ideology of the ruling elite trying to trump the common sense and logic by average citizens, who indeed do know better.

Other online chatters expressed concern that over-aged radicalized Islamic supporters would attack the schools and hoped that such people would be removed from schools. Taponen thought otherwise.

– On the contrary, people should be motivated to stay in school – whether it is a child or an adult, Taponen wrote .

The disgruntled online conversation was amazed whether Taponen really supports the fact that adult terrorists are in our children’s schools.

– Even a terrorist can benefit from good learning!, Taponen responded and said a school’s professional staff guarantees the safety of other students.

Janne Lehtinen: Fortunately, the adult ISIS terrorist put into school with children did not carry out, according to police, an attack at school. (The Turku stabber had multiple plans)

Hannele: And certainly not the only one … Was something done to that other 20v to get him out of school???

Jari Taponen: On the contrary, people need to be motivated to stay in school on the bench-whether it’s a child or adult

Hannele: I mean, what! As a police officer you support terrorists being in our children’s schools? 😱 😵😵😵

Jari Taponen: Even a terrorist can benefit from good learning! It might widen views and expand tolerance!

Jari Taponen: our schools are safe. It guarantees a professional teacher. 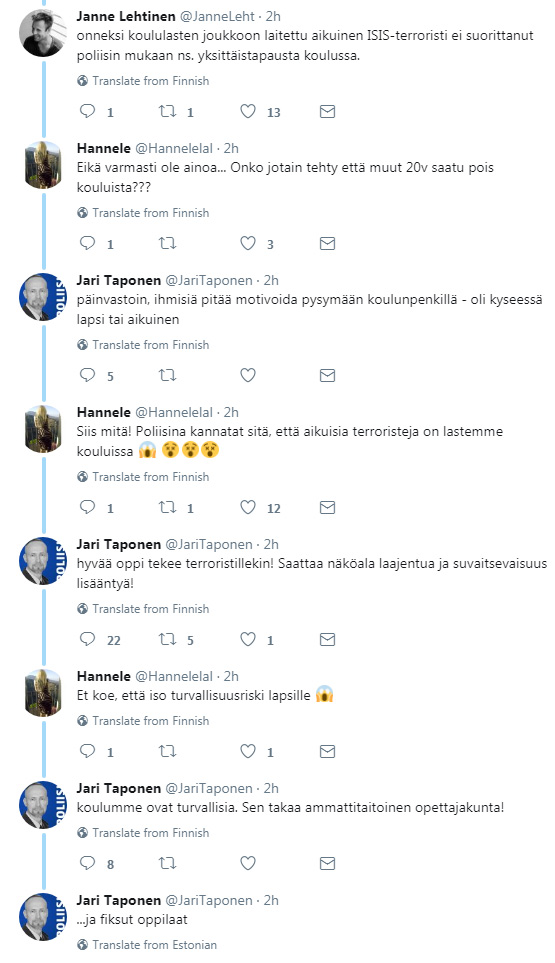 NOTE: Others responded as well:

– – Excuse me officer, do you really think that it’s ok that a person with links to ISIS should be mixed with children in school?

—  It is incredible that the police wants to isis-men to go to school with our children and yet still, praises the issue publicly. Who is your boss?

—  I do not think that even a parody of accounts tweets like that. You would think it too stupid or extreme to be even parody.