Police flew in a 180-seat charter aircraft from Stockholm to Lappeenranta in southeast Finland to deport nine young men to the Afghan capital Kabul. Officials say they are looking to move such flights from Helsinki after cases where protesters blocked police from enforcing deportations. 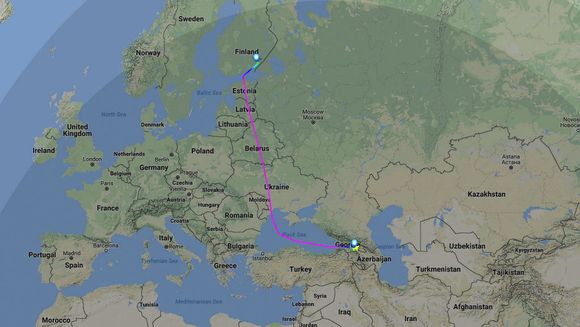 Police were prepared for demonstrators protesting the deportations and according to eyewitnesses, had deployed extra patrols and dozens of officers. However the deportation exercise proceeded without incident.

The 180-seat charter jet, operated by Czech-based firm Smartwings, which was used to deport the men was flown in to Finland from Stockholm. Before touching down in Lappeenranta, the aircraft stopped at the Helsinki-Vantaa airport where it picked up police officers to accompany the deportees on the flight.

The deportees had been brought together from various detention centres, including Joutseno in southern Karelia and Metsälä in Helsinki. Once the deportees had embarked on the vessel, the flight departed shortly before midnight.

The route took the plane to Kabul via the Georgian capital Tbilisi, where it refuelled before continuing the journey. A direct route would take the flight through Russian airspace. However, without permission to fly over Russia, it instead travelled through Estonian and Ukrainian airspace.

The flight landed in Kabul early Thursday morning. Among the deportees was Ali Shah, who had been in contact with a Finnish friend on Thursday.

“According to Ali the plane has landed in Kabul and they were taken to a safe house run by the International Organization for Migration,” said Sanna Valtonen, who had spoken with him.

On Monday, police in Jyväskylä detained an Afghan family and their infant daughter in what escalated into major operation because of protesters who blocked access to the asylum seekers. According to information obtained by Yle, that family was not among the nine people deported Thursday night.

“People are trying to disrupt the deportations nowadays and prevent them and we want to ensure the safety of the deportees and other airline passengers as well as the smooth flow of flight traffic at Helsinki-Vantaa airport,” said Liisa Lintuluoto Detective Chief Inspector of Helsinki’s immigration enforcement police.

In July, a group of anti-deportation protesters organized a demonstration at the Helsinki-Vantaa airport as police attempted to deport failed asylum seekers to Kabul. Lintuluoto did not comment on which airports would be used for deportation flights in the future.

The Lappeenranta deportation flight was first reported in the local paper, Etelä-Saimaa.