The Gradual Collapse of Sweden

Birgitta Ohlsson is a politician from the Swedish Liberal party. On the National Day of Sweden in 2001, she published an essay entitled “Abolish Sweden!” She wanted to abolish all nation states and institute a democratic global parliament and a global police force.[1] Ohlsson has been a member of Parliament for many years, and served as Minister for European Union Affairs in the government of PM Reinfeldt between 2010 and 2014.

A global democracy doesn’t look very likely, but Ohlsson and other Swedish politicians have nevertheless made great progress in abolishing Sweden.

In November 2015, even Sweden had to reinstate a form of border control. At that point, more than one thousand asylum seekers flooded into the country every single day.[2] The then Deputy Prime Minister Åsa Romson from the Swedish Green Party literally cried on TV over this fact.[3] She did not cry because successive Swedish governments have done massive and possibly irreversible damage to the country through their immigration polices. No. Romson cried because she couldn’t continue immigration as fast as she wanted to. 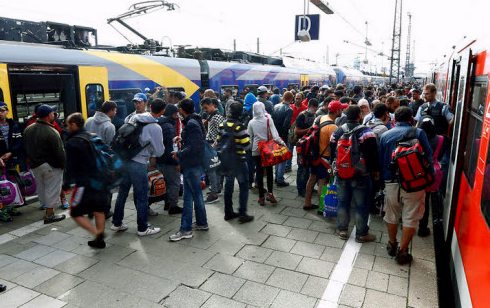 Their official party program in 2017 states the following, in multiple languages:

“The Swedish Green Party has a vision of a world without borders, where all people can move, but no one is forced to flee. We don’t believe in countries’ right to choose their citizens; we believe in people’s right to choose where they want to live. We should greet people with opportunities, not with walls. Everyone should be able to live, work and realise their dreams where they want to. Freedom of movement should be a human right.”[4]

Mass immigration to Sweden still continues, just at a slower pace than in the crazy year of 2015. Back then, Sweden couldn’t even find beds for the many Afghans, Iraqis, Somalis and other immigrants.

The German public broadcaster Deutsche Welle in late June 2017 conducted an interview with the Swedish Justice and Migration Minister Morgan Johansson, a Social Democrat. Johansson then stated that “We have between 400 and 500 asylum seekers each week coming to Sweden. So we haven’t shut our borders but we now have a level which we can handle. And we didn’t have that in 2015.” He stated that “Now we have control over that situation.” The Minister also claimed that there is “no direct link” between migration and terrorism.[5]

This last claim is a flat-out lie. It is a proven fact that Muslim asylum seekers and immigrants have been involved in many deadly Jihadist attacks in Europe. On April 7, 2017, the rejected Muslim migrant Rakhmat Akilov murdered five people and wounded several others when he mowed them down with a stolen truck in a terrorist attack in central Stockholm.[6] A couple of months later, the Swedish Justice Minister claims that there is no connection between migration and terrorism.

Prime Minister Stefan Löfven, Justice Minister Johansson and other representatives of the Swedish government may pretend that things are under control. There are, however, many disturbing signs that this is not true.