Translation: They (National Coalition and Center Party) reject protecting Finland’s civil society from hordes of Muslim settlers who have siphoned millions from the taxpayers, with the overwhelming majority of them being frauds.

Prime Minister Juha Sipilä said Monday afternoon that he will ask President Sauli Niinistö to dissolve the government so that he can lead talks to reconstitute a new government. Sipilä said that the coalition ultimately fell apart over doubts that the Centre and National Coalition parties would find sufficient common ground with the Finns Party on future issues. 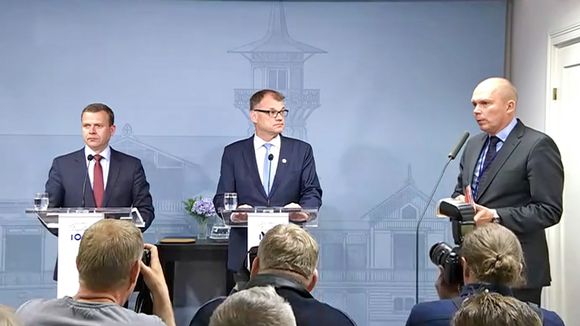 Speaking at a press conference Monday afternoon, Prime Minister Juha Sipilä said that governing coalition members would always have differing values. However he noted that with a new chair at the helm of the Finns Party, those differences had grown larger, and would pose a risk to government’s ability to function.

“We’ve already had to stretch our value base to its extreme, and now those value differences are even bigger,” Sipilä said.

Sipilä told journalists that during discussions with new Finns Party leader Jussi Halla-aho, the trio discussed his intention to function as party chair and member of the government coalition from Brussels, where he is currently serving as a Member of the European Parliament. According to Sipilä, Halla-aho proposed relying on the party’s vice chairs and the party leadership.

The PM said that the coalition partners also reviewed Halla-aho’s potential nominees for ministerial positions following a cabinet reshuffle. Sipilä noted that while Halla-aho did not provide any names, he was able to surmise that potential candidates would not inspire confidence.

“I will therefore go to the President and ask him to dissolve the government,” Sipilä declared. He added that once Parliament is dissolved, he would begin discussions aimed at assembling a new coalition as soon as possible.

Minister of Finance and National Coalition Party leader Petteri Orpo also weighed in on the government crisis, emphasising that unassailable human rights should be every government party’s concern.

“Human rights are the bedrock of modern Western democracy, not an issue of political correctness or party liturgy,” he said in the presser. “The current government programme is based on these values, and the NCP will only join a coalition whose members stands by these values.”

Orpo, like Sipilä, thanked Halla-aho for an open discussion, but also remarked that many questions remain unanswered and that Halla-aho’s way of speaking about immigration – the new Finns Party leader’s main platform – was “difficult to accept or even understand”.

“We want to conduct humane politics for the Finnish people, where everyone is respected equally,” Orpo said. “We will follow the government programme as closely as possible.”

Orpo also said that the decision to ditch the Finns Party was not an easy one, and that the future is uncertain. But one thing seemed clear.

“The chair of a government party must be present and reachable in the country itself, so leading the Finns Party from abroad in Brussels is an untenable idea,” Orpo said. “One could question whether the Finns Party is even fully functional at this time.”