This is a gross miscarriage of justice, and the man will be found guilty, all of these cases in which Finns have voiced strong (factually correct) opinions on Islam have in fact been convicted.

This is all about shutting down debate, as well as warning society at large about the dangers Islam poses. Just think of a ludicrous situation in which Marxist Russians being imported into Finland during the 30’s and 40’s during WWII, and who promote their totalitarian ideology that calls for subversion of the state, and being protected by the state when locals warn others about them. This is total idiocy.

NOTE: One of the ‘offensive’ quotes from his FB page mentioned was this: “Islam must be rooted out of Finland” and “the less Muslims we have, the safer it is. There now has to be an automatic reversal in full swing, and at the same time get rid of Islam.”

UPDATE: Tearful closing statement by Finnish Gay politician on trial for warning about Islam: “How else can one write about Islam…….?”

The charges relate to Facebook postings Tynkkynen made about Muslims and Islam. Tynkkynen is suspected of threatening, slandering and insulting Muslims based on their religion. Tynkkynen himself has denied the charges and says his intention was political, and that he wanted to defend western values. 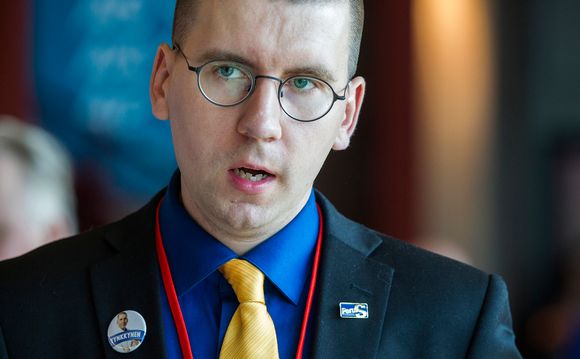 Prosecutor demands punishment for Tynkkynen for violation of and inciting subversion of religion against an ethnic group.

The charge relates to Tynkkynen’s July 2016 published writings on Facebook. According to the indictment served, as Chairman of the Board of Directors of the True Finns Youth party Tynkkynen had published in July on three different days public writings on Facebook, where he threatens, slanders and insults of a group of people identified with Islam based on their religion.

According to the indictment the views expressed by Tynkkynen in the writings of the Muslim group of people are of deliberate nature, racist and xenophobic abusive and slanderous hate speech, which is generally directed to all Muslims. This kind of hate speech is likely to arouse contempt and intolerance towards Muslims based on religion.

Tynkkynen admitted in the pre-trial investigation that he uploadd the messages in question by himself free for all to read on his Facebook page. He has, however, denied having committed a crime. He said that these were his political opinions. According to him, the purpose was not to incite against any Muslim people, but to criticize Islam and its values.

NOTE: This is a picture I took of Sebastian Tynkkynen at (ironically) Finnish state TV broadcaster YLE’s Free Speech event two years ago.