Tommy was joking about her on Paul Watson’s show just yesterday….. Lily ‘white’ Allen is so translucent that her natural camouflage shields her from the paparazzi in her hood. 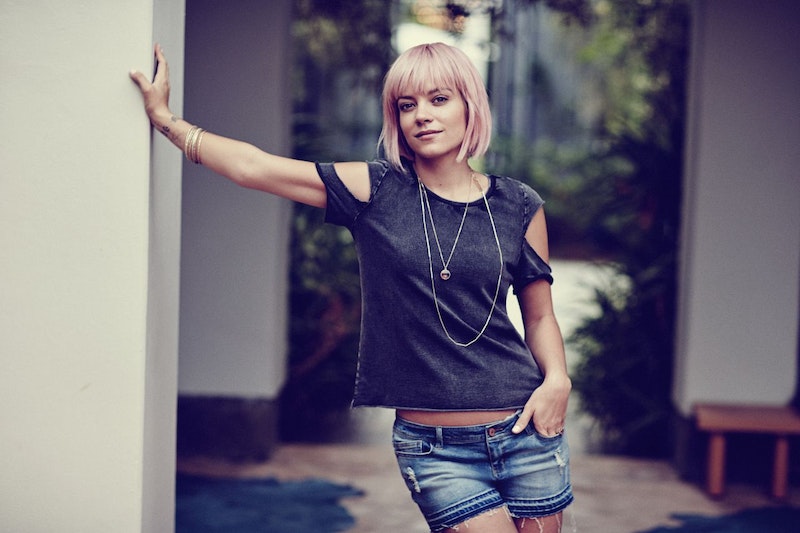 British singer Lily Allen loves a good feud. She’s tangled with the vicious and unhinged Azealia Banks, smarmy Piers Morgan, rival Katy Perry (Allen threatened to post her phone number on Facebook), and Courtney Love (Allen: “I would never fight with her, as a rule I don’t pick on crazy old ladies.”). Her latest spat was a Twitter dust-up with U.K. anti-Islam crusader Tommy Robinson, with whom she took issue for accurately labeling the perpetrator of the recent terrorist attack in Istanbul a “migrant,” which she called “racism.” Allen tweeted, “Don’t know his name or nationality but call him a migrant in the headline.” Robinson responded by tweeting that the pop singer didn’t care about the 39 people who died in the nightclub attack in the early hours of 2017, and called her a “fucking idiot” who was “virtue signaling.” Then the gloves came off.

The 31-year-old singer aroused the British nationalist leader’s ire last year when she traveled to the infamous “Jungle” migrant camp in Calais, France and apologized on behalf of her country to a 13-year-old boy from Afghanistan, finally breaking down in tears. She told the boy she was sorry her country had put him in the hands of the Taliban, but it was later reported that his father had fought with the Islamist Mujahideen in Afghanistan, later illegally fleeing to the U.K. when he became fearful of the UK-backed Afghan Northern Alliance. Allen caught a lot of flack for presuming to speak for the U.K. when she was in Calais on a personal visit, and ended up publicly apologizing.

Referring to the Rotherham, England child abuse scandal, Robinson then asked Allen, “Have you ever met or spoke to a victim of the Muslim grooming gangs, you don’t need to go to Calais to hear horror stories.” The singer/songwriter of “Fuck You” responded, “I’ve only ever been assaulted by white males so I feel slightly biased.” An independent report estimated 1400 children—no Muslims—had been sexually abused in the Rotherham between 1997 and 2013, primarily by gangs of British-Pakistani men. The abuses detailed included abduction, rape, torture and sex trafficking of girls as young as 13, and was allowed to occur over a 16-year period because authorities charged with protecting the welfare of children were afraid of being called racists.

What happened in Rotherham, and perhaps elsewhere in the U.K., was gruesome but Allen, in effect, trivialized it. She claimed that an unknown number of white men have attacked her, and compared this to systematic sex trafficking, rape, and torture that was covered up on a mass scale due to fear of PC retribution. In other words, out of cowardice, because adults need to protect children, regardless of the consequences. The Times, in its Rotherham investigation, discovered systematic sexual abuse of white girls by men of mostly of Pakistani origin. These men were not being prosecuted.

The outspoken critics of this horror and subsequent cover-up have never said anything about skin color being connected with child sex abuse. Allen’s the one who did that, plus she’s making it about herself, which is unconscionable. Systematically, year after year, targeting young girls based on their religion or skin color, which is what happened in Rotherham, is the worst form of bigotry imaginable, yet liberals like Allen are more concerned with reminding everyone, irrelevantly, that people of all skin colors abuse women. This misguided focus didn’t work out well for those 1400 girls.