But post-hijra Islam (basic) 101 is in fact violent, repressive and very detrimental to modern liberal democracy.

Free speech be damned, the Finnish courts of injustice have deemed any criticism of islam a punishable offence. These courts are an insult to our sense of common sense and reason and its members should be yanked off the bench and fined for gross stupidity.

True Finns Terhi Kiemunki has been sentenced with fines for ethnic agitation by the Pirkanmaa District Court. The judgment was in response to anti-Islam blog post. 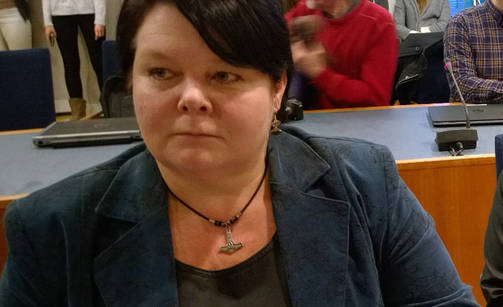 Kiemunki’s publication in March of a blog post in which she argued that Islam is in danger of destroying democracy and causes violence.

The District Court deemed the content of writing, slanderous and abusive of the group of people religion identified with Islam.

– Kiemunki blog post and her story in court are parallel to each other with respect, that “repressive, intolerant and violent religious culture” Kiemunki has meant the religion of Islam, the court says.

NOTE: She is planning an appeal to the supreme court:

Terhi Kiemunki appeals to the Court of Appeal

Finnish politician convicted of incitement against a population group wants to look at the limits on what its permissible in a higher court.

– I am still of the opinion that the reporting of findings of statistical facts, or even the telling of an opinion should not be a criminal act, because someone does not like it, Kiemunki writes.

– “I wrote that I don’t want our country to be overtaken by a culture and law based on a violent, intolerant and oppressive religion.”

On Thursday, the Pirkanmaa District Court found Tampere Finns Party politician Terhi Kiemunki of agitiation against an ethnic group. Kiemunki was charged with the crime over a blog post in the online publication Uusi Suomi, in which she claimed that all of the terrorists in Europe are Muslims.

The court found her guilty of slandering and insulting adherents of the Islamic faith. Her lawyers denied the charge and have appealed the court’s decision.

During the trial, Kiemunki was asked why she did not make a distinction between Islam and radical Islam. She replied that she meant to refer to the spread of Islamic culture and religion, and that she “probably should have’”spoken of radicalised elements of the religion instead of the faith as a whole.

The Court found that Kiemunki’s writings and her court testimony had the same tone, and that when she wrote of a “repressive, intolerant and violent religion and culture” Kiemunki meant the Islamic faith. As a restult the court concluded that the nature of the Tampere Finns Party politician’s blog generalised to refer to all Muslims.

It went on to say that the content of Kiemunki’s post was defamatory and offensive to people who claimed Islam as their faith. The court ruling concluded that the writings could therefore be regarded as liable to cause contempt and hatred towards Muslims.

The court slapped Kiemunki with a 30-day fine equivalent to 450 euros. According to the court what was more relevant than than the magnitude of possible fallout from the blog post, was that the act was seen to fulfill the criteria for a punishable offence.

The case was also seen as test of what kind of language can be used before crossing the threshold of what is permissible.

Following a public backlash against the post, Kiemunki herself had called on police to investigate the case and to determine whether or not she had committed an offence. At the time, she also raised eyebrows – and temperatures – following a Facebook post in which she derided Muslim children who were participating in a Finnish Easter tradition.

Kiemunki: I am the victim

Following the sentencing, Kiemunki issued a release in which she charged that public pressure was behind the verdict. She said that she planned to take the matter to the appeal court.

“I am still of the view that declaring statistical facts or even sharing an opinion is not a crime if someone doesn’t like it,” she wrote.

She said that the Uusi Suomi blog wasn’t consciously intended to slander or offend anyone and that it did not target any specific individuals.

“I wrote that I don’t want our country to be overtaken by a culture and law based on a violent, intolerant and oppressive religion.”

The Finns party politician added that her essay did not generalise about Muslims but pointed out that not all Muslims are terrorists.

“In these times, specifically in the recent past and today, all of the perpetrators of terrorist acts have turned out to be Muslim,” she argued.

Kiemunki insisted that she was the victim in the case.

“I wrote the blog because the actions of the media, Greens and Left caused me to be condemned as a criminal, an instigator of hatred and someone who could be insulted and slandered at will publicly and in private messages; someone whose life and even family were threatened,” she disclosed.

Kiemunki was recently unanimously elected to chair the Tampere chapter of the immigrant-sceptic Finns Party. She is aide to Finns Party MP Lea Mäkipää.