The Local sucks. Not only is Israel burning from islamonazi started blazes, but perhaps also in Sweden as well. 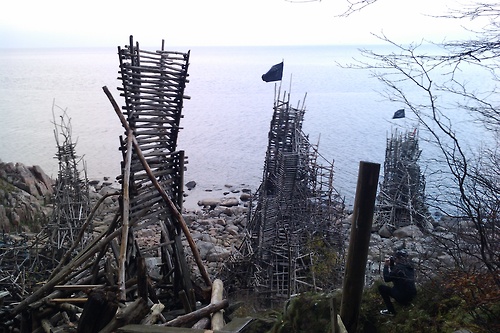 Vilks himself said that the destruction of the sculpture was all part of the art.

“I have my motto ‘everything is an advantage’. You always have to find something optimistic and art that’s subjected to violence always benefits from it, you have to comfort yourself with that,” he said.

“It gets interesting when things are happening. When you attack artworks it gets interesting. A work of art that nobody cares about, it disappears. This is tough action and a rather brutal form of art critique.”

Notorious Lars Vilks artwork burns to the ground in Sweden

Police are investigating suspected arson after a fire in southern Sweden saw much of, equally famous and infamous, artist Lars Vilks’ life’s work burned to the ground on Thursday evening.

Internationally, Swedish artist Lars Vilks may be most known for his controversial cartoon of the Prophet Muhammad as a dog in 2007, which has made him the target of a string of assassination plots, forcing him to live in a secret location and national security service police to guard him round the clock.

But in Sweden, he is also closely associated with Nimis, a maze-like wooden rebel land art installation culminating in huge statues erected on the north-west peninsula Kullaberg of southern region Skåne.

Around a fourth of the construction was completely destroyed in the Thursday blaze.

Vilks said he believed the fire was started by either those opposed to Nimis itself or those opposed to his cartoon of the Prophet Muhammad. Police have not commented on this, but are treating it as suspected arson.