The outrage is also over how Tommy Robinson has been subsequently treated by that office. 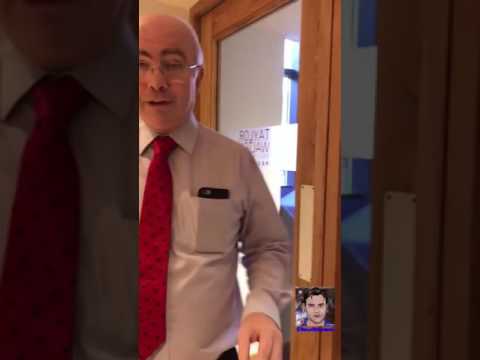 I have just seen the footage of your telephone conversation with Tommy Robinson, and I am quite taken-aback at the complete indifference that you and Taylor Walton display towards Mr Robinson and his family.

Since you appear not to grasp the enormity of what McLoone has done, and what your response should be, please allow me to spell it out for you.
Tommy Robinson and his family have to live under assumed identities at an undisclosed address due to the violence which has previously been directed at Mr Robinson, and the number of threats of further violence made against him and his family.

Ian McLoone appears to have developed a mono-mania regarding Mr Robinson, extending to the outrageous claim that it would be “just deserts” (sic) if any harm came to his family.

(Note that apart from his personal unpleasantness, McLoone is so stupid that he believes the phrase “just desserts” to be “just deserts”…..)

His personal animosity towards Mr Robinson led him to find out and disclose his home address on public media, doing this at a time when Mr Robinson was widely-known known to be out of the country and could not therefore protect his family from assault.

Once his home address had been publicised by McLoone, his family had to be moved to a hotel for their own protection, which must have caused fear and distress to his young children and his wife.

On his return Mr Robinson sought an explanation as to why McLoone did it, how he came by this confidential information, to whom he had made it known, and an apology.

At no point was he aggressive or abusive toward McLoone or to yourself, although – given the circumstances – any reasonable person would excuse him in the event that he had been.

McLoone’s behaviour on both occasions when approached by Mr Robinson was both cowardly and contemptible; attempting to hide his face from the camera, bleating that he “disagreed with (Robinsons) views” as though that justified facilitating vigilantism, requesting colleagues to call the police instead of engaging in a discussion, refusing to answer his own front door, and calling the police* for a second time.

(* Quite why does he feel that – as a supposedly grown man – he should be protected by the police from the consequences of his own behaviour in the form of a visit from a naturally indignant father requesting an explanation, whilst simultaneously regarding it as desirable that innocent children and their mother should not be protected, but should instead be deliberately put in harms’ way to satisfy McLoone’s vengeful urges ? )

All this must have been known to you and your colleagues before you contacted Mr Robinson.

The first response of a normal human-being would be to immediately apologise on the firm’s behalf to Mr Robinson, and enquire as to his family’s well-being and establish whether any harm had in fact come to them as a result of Ian McLoone’s reckless and vindictive actions.

Following that, you should arrange a meeting with Mr Robinson and his solicitor to offer a formal apology, and discuss compensation for any costs that they have already incurred – taxis, hotel rooms etc – and any future costs relating to change of address, childrens’ schools etc.

These costs should be borne by Ian McLoone, and he should be dismissed from your employ for gross misconduct.

That your first response should instead be to seek an injunction against Mr Robinson does not reflect well on Taylor Walton’s ethics and morality.
Ian McLoone made it his business to find out and publicise Tommy Robinson’s address so that vigilantes could track him down; in turn, others may make it their business to circulate the facts of this case as widely as possible.

If you have issued a public statement on this matter, I would be most interested to receive a copy via e-mail since I see that you have taken down your web-site; doubtless due to the public interest in Mr McLoone’s conduct and subsequent un-manly behaviour.