If that’s the case, then that would be always the case wherever people feel discriminated against.

But it’s not the case, there is no abject poverty in Sweden, the Swedish government shells out a disproportionate amount of taxpayer money in propping up their mass immigration policies. Most of these punks have their cell phones, designer jeans and night clubbing spots readily available to them. This is about turf control. 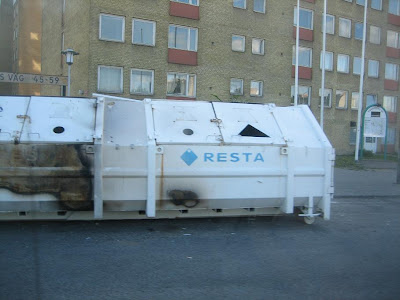 After VLT’s examination of the causes behind the many car fires in Västerås: Now a young guy explains why young people let off steam by burning cars.
These are his own words.

I am writing this in the hope and belief that it will reach out to people with more power in society, which can help to change Skallberg into a better area. I write this from my own experience, which I have both seen and been through. I have grown up in Skallberg and know some of the young people.

In this email I write now I will try to explain how we perceive things. So do not point the finger at us helpless youths just because you have succeeded in your life, some need help more than others. I am one of those who came to Sweden at an early age and it corresponds quite well that I had good conditions. Besides my family’s relationship was like shit and a lot of frustration built up over time that went, and the more I developed and grew older, the more I was drawn into this vicious spiral with similar people who more or less carrying the burden themselves.

Already at an early age when I became a man I was treated differently. Sometimes it was because of ethnicity, sometimes because they were at a certain place, and sometimes it was just people who had felt the power to mess with us. So many times I had been propped up against the wall and strip-searched in front of my loved ones. It really depressed me and my value. Do I have to cover my face when I’m staying in the area I grew up in? For what reason then? The police abused their power, and painting us all with the same brush.