World is silent, except when it comes to Israel

Op-ed: Millions are being killed around the world, but nearly all protests, articles and rallies are against Israel; this manipulative and poisonous protest paves the way for the world’s silence in light of the massacres and crimes that are really taking place.
Ben-Dror Yemini|Published:  31.10.16 , 22:28

The massacre in Mosul and its surroundings has already begun. Everyone is killing and massacring everyone. Not just ISIS. The world is watching. The world knows. And the world is keeping quiet. Only several weeks ago, it happened in Aleppo in Syria. The big hospital was ruined. The world knows, watches and keeps silent.
The world’s greatest power has decided not to intervene. A few observers. Some air support. Nothing more. This was legitimized by US President Barack Obama. He had promised to intervene if Syria were to use chemical weapons. There was a short-term illusion regarding an agreement. The use of chemical weapons continues. The massacre has only expanded. 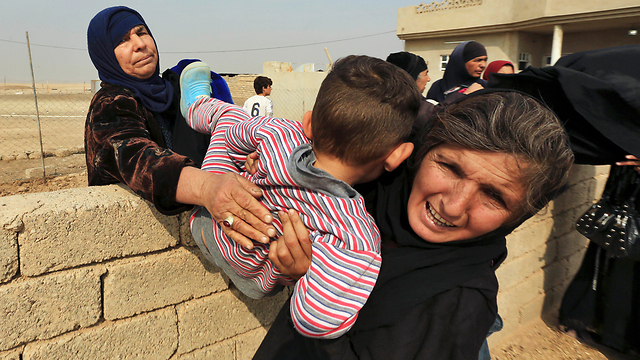 Every mass slaughter requires every human being, definitely a Jew, to think about the world’s silence in the 1940s. There is a double lesson from the Holocaust, both national and human. The national lesson has been learned. Israel can defend itself. The human, universal lesson has never been learned.

But let’s not say that the world in general, and the free world in particular, does not have a conscience. On the contrary: a protest is going on. A protest against Israel. Almost exclusively against Israel. Millions are being killed in the world. But the protests, the articles, the rallies are mainly against Israel. Most of the resolutions of the United Nations’ Human Rights Council, in its previous and current round, are against Israel.

While Israel’s contribution to world violence is insignificant, most of the world’s protest is against Israel. Masses filled up the squares of London, San Francisco, Paris and Amsterdam in protest of Israel’s “massacre” of the Palestinians, a massacre that never happened. There have been nearly zero protests against the rest of the massacres in the world.

When it’s not about Israel, the world is not only silent, it is also hypocritical. Over the last weekend, protestors disrupted an event on a campus in London in which an Israeli was slated to perform. The protestors came from the countries which carry out the greatest massacres, and were joined by young members of the British Left and the Labour Party, who are afflicted with the anti-Semitism disease. And in another event, the House of Lords hosted a conference in which Jews were blamed for the Holocaust.