Because Jerusalem was never an Islamic holy site.

None of these important finds are really necessary, we already know that the Temple Mount is Jewish in origin, we have more than enough proof of their claim is legit. The Muslims claim otherwise because Islam is nothing but the usurpation of the beliefs of others. 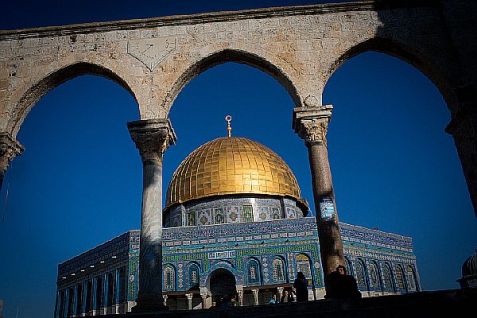 Tourists seen walking at the Dome of the Rock at the Temple Mount in Jerusalem.
Photo Credit: Miriam Alster / Flash 90

The ninth annual conference on archaeological discoveries in Jerusalem and its environs that was held at the Hebrew University this week revealed the existence of an ancient Muslim inscription testifying to the fact that the original name of the Dome of the Rock, Qubbat al-Sakhrah, was “Beit al Maqdis” بيت المقدس — “Beit Hamikdash” in Hebrew, aka the Jewish Temple — during the early Muslim era, Makor Rishon reported Friday.

According to archaeologists Assaf Avraham and Peretz Reuven, the inscription is dated to the 10th century CE, about a thousand years ago. It is located above a mihrab-prayer niche inside an active mosque in the village of Nuba, located seven miles north-west of Hebron. It is unknown when it was placed there, but it certainly throws a fresh light on the process by which Jerusalem became holy to the Muslims and the inspiration that Islam drew from Jewish sources regarding the holiness of the Temple Mount compound and the Jewish temple that once stood at the spot where today stands the Dome of the Rock shrine.