He’d be right, that’s where his intolerance towards the non-muslim originated. ‘No-one controls me but Allah!’ Disgraced Coronation Street star Marc Anwar says he was already leaving the show before he was sacked for racist tweets

Shamed Coronation Street actor Marc Anwar has claimed he was already leaving the soap before he was fired for a series of racist tweets.

Pakistani-born Mr Anwar, 45, who plays the role of Sharif Nazir in Corrie, was sacked after referring to Indians as b******s’ and ‘p***-drinking c***s’ on Twitter.

But last night, the actor claimed he was set to leave the show at the end of his contract in November.

He said his apology was nothing to do with having lost his job.

Writing on Twitter Mr Anwar said: ‘For the record, I was to leave show at the end of [my] contract in November. Apology is from regret for offending, not at early exit. Love all.’

He added: ‘No human controls my livelihood but My Allah. Never have never will grovel to anyone! Proud Muslim, proud Pakistani, very proud British.

‘Oh and God save the Queen. Rule Britannia!’ 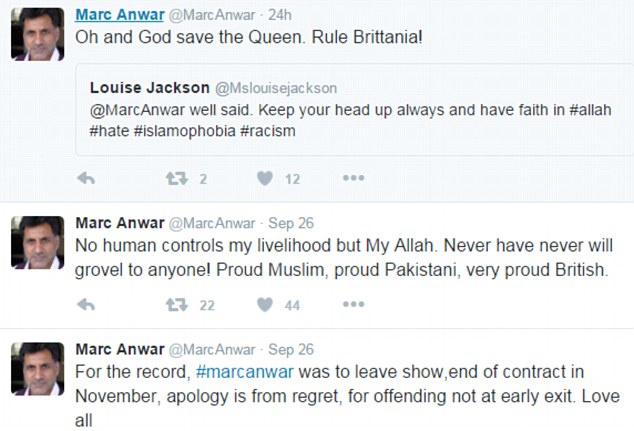 Last night, the actor claimed he was set to leave Corrie at the end of his contract in November