This article was originally published in Israel National News and republished here with the author’s consent. Thank you for your reception in the Netherlands. I appreciate your offer to enhance the relations between our two countries.

During our conversations, I offered you Israel’s help in your fight against terrorism. You know well that we have great experience in this area due to decades of enduring extreme Palestinian and other Arab violent criminality against us. And you could sure use our help. Your main counter terrorism body (NCTV) reports that the threat level to Holland is substantial.1 Earlier this year, your then police chief said that a terrorist attack in the Netherlands is unavoidable.2

During my short visit in the Netherlands, I met an unintegrated Dutch and Turkish national, a parliamentarian called Tunahan Kuzu. When I put out my hand to him, he refused to shake it.3 This immigrant is apparently so poorly integrated in the Netherlands that he has not even adopted basic Dutch manners: that one shakes hands even with people one disagrees with. If one does not want to do so one should stay away from a meeting with that person. Mr. Kuzu was elected in 2012 on the list of your coalition partner, the Labor Party. It took them until 2014 to expel him because of his views on integration.4 As I said in a video afterwards, his refusal to shake hands was indicative of who wants peace in the Middle East and who does not want it.5 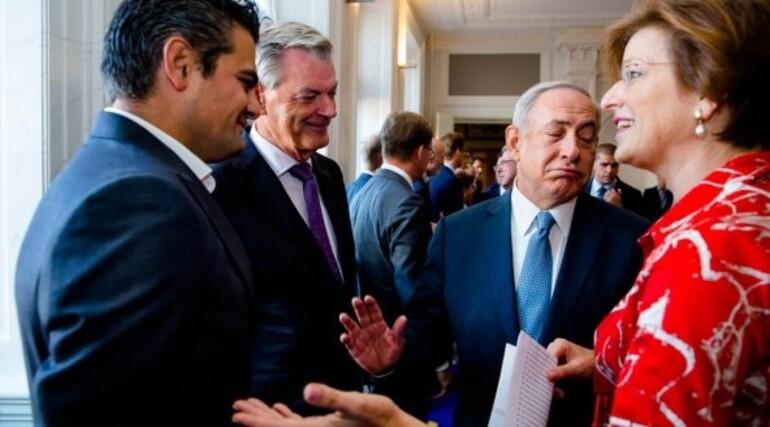 I heard with interest about your reaction on TV, when Turkish Dutchmen harassed a journalist during a demonstration in Rotterdam. You used an expression for which ‘shut up to Turkey’ can only be called a euphemism.6 After I left you called another group of young Turkish hooligans in Zaanstad, “scum.”7

You, several of your ministers, and also coalition parliamentarians have been quite annoyed by Turkish interference in Dutch affairs.8 You and your predecessors however, have interfered much more profoundly and far more frequently in Israeli affairs, and have been for many years. You did so even with your statement about the settlements which you made during my visit.9 Dear Mark, this is both bias and bad manners.

Dutch governments have also been funding anti-Israel organizations which promote Boycotts, Divestment and Sanctions against Israel with perhaps more than a billion euro in the last ten years. Your Minister of Foreign Affairs, Mr. Bert Koenders has tried to fool us by saying that your government is against BDS, but failed to mention all the money the Netherlands has poured into BDS promoting organizations.10

And as far as interference is concerned: How bad is it if the Turkish government press agency publishes a list of Gülen supporters in the Netherlands?11 It is insignificant compared to the many ways that your government and its agencies interfere in Israel’s affairs. Either stop inciting against us, or do not mind Turkish interference in your country. I take the liberty to remind you that as a member of the International Holocaust Remembrance Alliance, the Netherlands has agreed to the acceptance of its definition of anti-Semitism.12 That definition considers double standards against Israel as anti-Semitic.

One of your predecessors, former Prime Minister Dries Van Agt, called me a war criminal when I came to the Netherlands. He is not only an extreme anti-Israeli agitator.13 He has also legitimized Hamas, a movement which in its charter calls for the murder of all Jews.14 Mr. Van Agt has not only a pitch-dark present but also a deep dark past. When he was Minister of Justice, this current promoter of the interest of a Palestinian genocidal movement wanted to free the greatest German criminals of the persecution of Dutch Jews from jail.15

That happened in a country whose wartime government in exile in London showed no interest whatsoever in the persecution of its Dutch Jewish co-citizens, of which close to 75% were murdered by the German occupiers. How can a mainstream Dutch party like the Christian Democrats maintain this man as a member? All the more so, as they put so much emphasis in their program on “norms and values.”

I promise you Mark, that I will not retaliate. When you come next to Israel, I will not ask you why the Dutch government is the only one in Western Europe which has never admitted the dramatic failures of its wartime predecessors with respect to the Jews. On parliamentary questions about this subject you have given absurd answers by referring to then Queen Beatrix’ statement in the Knesset. I had that checked in the records. Her statement on the issue was simply hot air.16

During my stay in the Netherlands, I was shocked to hear that a journalist who visited the Schilderswijk neighborhood in The Hague, was stopped from carrying out her work by shouts of “Death to the Jews” and “Jews are not welcome.”17 You are no longer a country occupied by Germans, so first put your own house in order before telling us what to do. I have also read that a Jewish journalist had to leave that same neighborhood because of problems with radical Islamists and sexist remarks that were directed at his wife.18

As you criticized me when I came to the Netherlands, I assumed that you had heavily reprimanded Palestinian President, Mahmoud Abbas when you invited him to lunch in October 2015. It was not long before his visit that he had incited violence, terrorism and bloodshed in Jerusalem saying: “We welcome every drop of blood spilled in Jerusalem. This is pure blood, clean blood, blood on its way to Allah.”19 I thought that at least you would tell him to stop the incitement of violence toward civilians. My staff checked and to our surprise, you criticized our settlement activities and did not mention anything about Abbas’ incitement.20 Mark, once again you applied double standards.

I am all the more astonished about this because I am offering to help you to deal with the substantial terrorist threat in your country. All Mr. Abbas can do for you is to teach you how to glorify the people who may murder your civilians, for instance by naming public places after the killers. I guess you are also not interested in his people teaching you how to train suicide bombers and undertake other terrorist acts, of which the Palestinians are world leaders?

I am all in favor of your suggestion to enhance relations between our two countries. As a first step I suggest the establishment of a joint Dutch-Israeli committee to see how to get rid of all your double standards against Israel.