Check the pick, most of them there were muslims…..

Wow,….migration is a right, deportation is a crime! Who knew!? 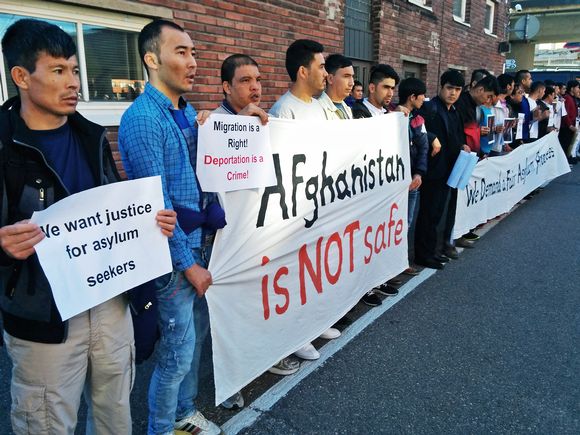 So everyone in the world has a right to determine Finnish immigration policy for the Finns, thanks for clearing that up for us. (The loon Left is responsible for this provocation, at least they can spell)

A demonstration protesting Finland’s ‘unfair and arbitrary’ asylum decisions got started at about 11 am Thursday outside the Finnish Immigration Service (Migri) office in the Kalasatama district of Helsinki.

Some 400 people had pre-registered on social media to attend. The protest was coordinated by the Free Movement (Vapaa liikkuvuus) network, which argues that the Immigration Service’s decisions are arbitrary. The network states that the Service is simply trying to turn as many asylum seekers away from Finland as possible.

Speakers at the protest included Sanna Vestin of Refugee Groups Privy Council, Stockholm, Rex Osa, a refugee activist from Stuttgart, Germany as well as Iraqi, Afghan and other nationals awaiting a decision on asylum in Finland.

The Free Movement group demands that the negative decisions made since stricter asylum criteria came into force be re-investigated and the Service’s country policy be changed. In May, Migri released an assessment claiming that the security situations in Afghanistan, Iraq and Somalia had improved and that large areas of the countries were safe.

A couple dozen members of the anti-immigration group Finland First (Suomi Ensin) were also on hand in front of Migri headquarters. They were ordered to remain some distance away from the other protesters.

Public discussion of Migri’s activities has grown since the country’s leading paper, Helsingin Sanomat, published a scathing report on Sunday. The report quoted several Service employees as saying that there is considerable pressure on them to make negative decisions, and that even the inner workings of the Service aren’t clear about the justifications behind the revised security assessments.

Just before the demonstration began on Thursday, Minister of the Interior Paula Risikko met with Finnish Immigration Service employees, in a meeting that tabloid Iltalehti said was called for the minister to hear the testimonials of the Service’s employees and discuss the pressures of their work firsthand.

After her meeting, the minister said, “My trust in the work of the Finnish Immigration Service is strong. I give the Service my full support.”

Meanwhile, retired police commissioner Mikko Paatero has claimed that asylum seekers in Finland are secretly organising. He also accused the authorities of providing a too rosy picture of the real situation at the country’s asylum seeker reception centres. Paatero, who’s just published a book, argues that groups of rejected asylum seekers might drift into crime.

The Chief Superintendent of the National Police Board, Timo Kilpeläinen, and the Ministry of Interior’s highest-ranking official, Permanent Secretary Päivi Nerg, both denied the allegations, saying they had no knowledge of any covert coordination.