Better for all of us that she’s there, than spreading her venom here. Hyvästi. 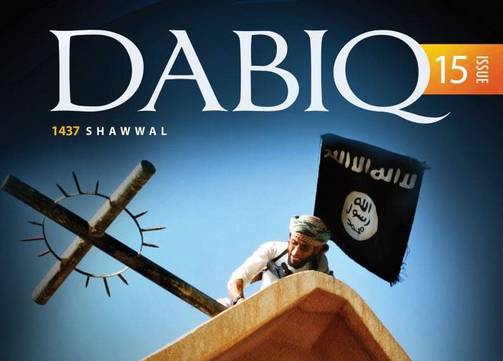 The ISIS propaganda publication Dabiq carried an article this summer featuring the story of a Finnish woman, a convert to Islam, who told of her discovery and commitment to radical Islam and her life under the “Caliphate”.

According to the article, the woman says she converted after divorcing her first husband and her second husband was arrested in Finland as a terrorist suspect. After he was freed, the family left to join Isis. Four months later, her son died a “martyr’s death”.

The newsstand daily Iltalehti reports today that experts who have analyzed the article say that although it has not been confirmed, the tale rings true, and that the woman probably does exist.

Leena Malkki, a terrorism researcher at the University of Helsinki, told Iltalehti that the story would be hard to fake. She notes that it includes many credible details about how the woman grew up in Finland and about Finnish society.

Another specialist interviewed by the paper, Atte Kaleva also considers the story genuine. He points that it is not targeted at a general audience, but rather at “ethnic Finnish converts to Islam and Muslims who have rediscovered their faith. In general, these two target groups are the most fertile ground for Salafi jihadism”.