Finland is circling the drain economically as it borrows financially to cover its losses in revenue. The highly centralized state has been trying to divest itself from its centralization of concentrated power, but to little avail, the unions have its collective grip around the present government’s lone testicle.

I was recently in Helsinki at an Israeli embassy sponsored event where I was told by a National Coalition MP that he was greatly disappointed by the lack of success by this present coalition government (which includes his party) in getting their reforms through. It’s nearly impossible.

In 300 pages, Ms. Partanen offers an expanded version of what my Swedish antagonists could summarize before the herring and schnapps were served: America is a pretty horrible place and would be less horrible if it were more like Finland. Or Sweden. Or Norway. 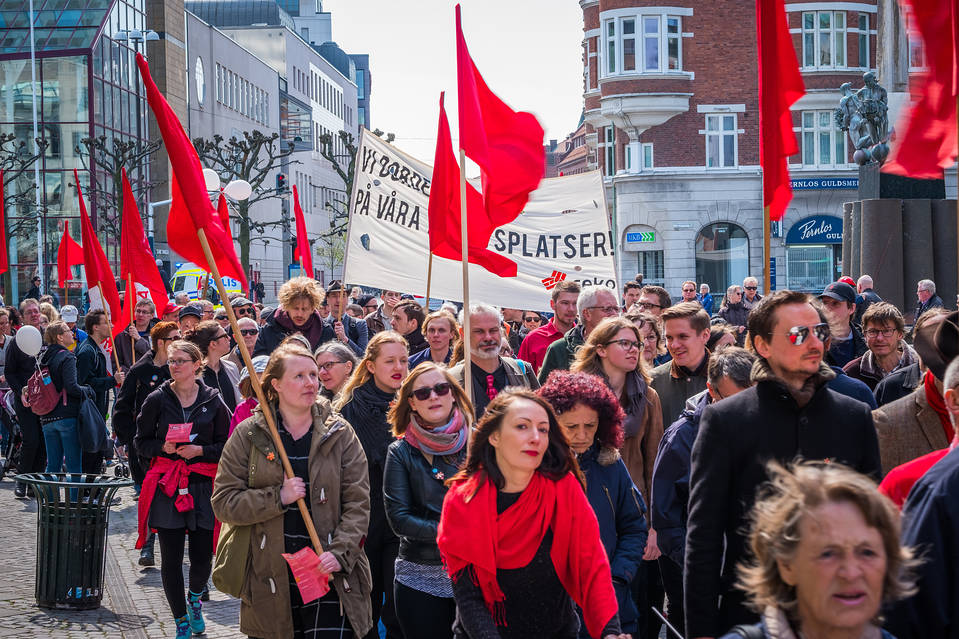 A May Day march in Malmö, Sweden, organized by the Left Party, 2016. PHOTO: GETTY
By MICHAEL MOYNIHAN

There are plenty of American runaways scattered around Sweden. The now elderly passel of draft dodgers and former Black Panthers; a recently arrived spy, dodging prison time for penetrating the State Department on Cuba’s behalf; and various others relying upon Sweden’s unwillingness to extradite those accused of “political crimes.”

My reasons for emigrating from Brooklyn to Stockholm in 2003 on the eve of the Iraq War, as its opponents loudly considered seeking refuge from George W. Bush’s America, were more prosaic. I was in pursuit of a woman.

But Sweden is Berkeley, Calif., in country form—a place where even romantic relocations are ultimately recast as political acts. Soon after my residency permit was affixed to my passport, I found myself before the first of many Stockholm dinner party tribunals, during which I would be held accountable for America’s manifold sins. Indeed, the job of volunteer war-crimes defendant was so onerous that I considered fleeing the country, declaring myself a refugee from First World political persecution.

As my language facility increased, I discovered that the country’s largest newspaper objected to Jimmy Carter receiving the Nobel Peace Prize because he was, apparently, a right-wing supporter of terrorism. A columnist at the same paper routinely hailed the armed “resistance movement” in Iraq because their “actions were mostly directed at the occupation forces.” When that paper’s automotive correspondent sat in judgment of a new series of Chevy pickup trucks, his review was punctuated with an attack on how America’s “Jewish lobby” ruined Christmas.

In a book allergic to nuance, one would nevertheless expect Ms. Partanen to confront Finland’s current position as “the sick man of Europe,” stemming from its long-declining GDP and steadily increasing unemployment rate. (Youth unemployment is above 20%, double the American figure.) The current government is now openly contemplating new limits on paid holidays, overtime and sick leave to constrain runaway budget deficits. Sweden’s vaunted health-care system, so fulsomely praised by Ms. Partanen for eschewing privatization, will soon be allowing patients more choice between public and private providers. Finnish economist Jan von Gerich recently said that “the only way for Finland to have a future is for the old model to be reformed.”

While Ms. Partanen insists that the Nordic social model is the answer to most of the U.S.’s problems, she all but ignores one social phenomenon long familiar to Americans: immigration. Convulsed by waves of migration that are straining resources and provoking the rise of the far right, Nordic social democracy is being challenged by a more heterogenous population. It’s the one of the most important issues facing Nordic countries today, but Ms. Partanen won’t go near it, instead commenting that “many immigrants to the Nordic region find its citizens cold, hostile, and closed-minded,” though “sometimes it is a misunderstanding.”

NOTE: Finland’s highly vaunted healthcare system patterned on the rest of the Nordic region’s system, is full of holes, so much so that the private healthcare system rivals and surpasses it. The downside is that the taxpayer ends up being double dipped.

To show the difference between the American system (before Obama care, but taking note that it wasn’t close to being perfect) and the Finnish one, some years ago, both my mother living stateside, and my Finnish mother-in-law (both now deceased) were diagnosed with cataracts in both eyes.

My mother (medicaid) was in the surgery room 2 weeks after being diagnosed, then 3 weeks later having the other eye operated on and on the path to full recovery. My Finnish mother-in-law (who at the time, was handing out medicine to her husband) had to wait over 9 mos. before being taken in after receiving a plethora of cancellation notices.

Something tells me this would never make the pages of Anu Partanen’s book.