Best advice when dealing with koranimals, never listen to their wailing, never give in to their demands.

Not being allowed to rampage through the Jewish Quarter yelling “Kill the Jews” restricts Muslim freedom of worship.   After the riots in recent days, the Muslims should be grateful to be allowed up to the Temple Mount at all.

Total irony when nary a shred of Christmas can peep out in Saudi Arabia, Jews cannot pray on the Temple Mount, Jews were not allowed by Muslims  further than the 7th step of the Cave of the Patriarchs building historically, and still have no access to the actual cave.

ACRI complains on Muslim restrictions from the Jewish Quarter during Ramadan, “freedom of worship” 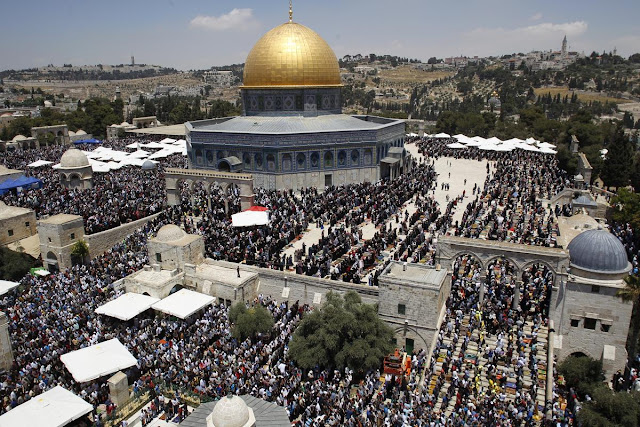 The Association for Civil Rights in Israel has condemned the Jerusalem police for enforcing crowd control of the hundreds of thousands of Muslims who are flocking to the Al Aqsa Mosque during Fridays in Ramadan.

On their Arabic site only, it says that ACRI attorney Nisreen Alyan sent an urgent letter to Jerusalem police head Yoram Halevy demanding the suspension of the new rule to prevent Palestinian residents from passing through the Jewish quarter on Fridays during Ramadan. They call this a “racial discriminatory approach” and that it “seriously affects the freedom of worship and the practice of prayer in the Holy Places and access to it, during the holy month of Ramadan, which is considered the most sacred month for Muslims.”

The residents of the Jewish quarter have complained that during Ramadan they are effectively prisoners in their own homes as Muslim worshipers throng through their narrow streets – sometimes with chants of “Itbach al-Yahud,” or “Kill the Jews.”

The human rights of Jews in the Jewish Quarter of Jerusalem are apparently not worthy of protection, according to the Association of Civil Rights in Israel.

Is there a single Muslim who has not been able to reach the Al Aqsa Mosque because of the closure of the Jewish Quarter? If not, considering their “freedom of worship” which is not being impinged to be more important than the freedom of Jews in the Jewish Quarter to live their lives is less than consistent.