These people are deranged….and dangerous. 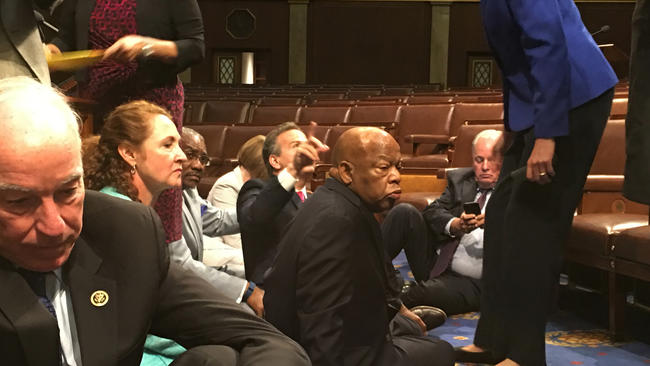 The Islamonazi that murdered 49 homosexuals in Orlando was interviewed by the FBI twice, and informed upon by co-workers, who were then dismissed as Islamofauxbes. If proper identification features were in place, meaning, having the ability to address the Islamic fundamentalist dimension to a person’s pattern of behavior, Omar Mateen would never have been able to buy those guns.

Now House Democrats want to hand over to the Attorney-General dictatorial powers which eviscerates the constitution / 2nd amendment on the right to bear arms. It’s insane. It’s the Democrats who are solely responsible for the dumbing down on the language officials can use in describing the threat to the homeland (Islamic terrorists) which was solely responsible in allowing this piece of crap (Mateen) to get away with buying weapons.

All the signs were there, but if you’re unable to speak about those signs, you blind and bind law enforcement and the intelligence community.

The U.S. House of Representatives descended into chaos on Wednesday after Republicans refused demands by Democrats, who staged a “sit-in”, to bring up gun control legislation in the wake of the nation’s worst mass shooting in modern history.

Scores of Democrats flooded the chamber for more than 12 hours, sitting on the floor and chanting in a “sit-in” protest, taking over the House even as the Republican leadership shut off television cameras and microphones as they tried to force lawmakers back to order.

Republican House Speaker Paul Ryan refused Democrats’ demands for action on gun control and instead forced a vote on unrelated bills even as raucous scenes spilled across the legislative chamber.

Several Republican representatives, including Louie Gohmert of Texas and Steve King of Iowa, charged the chamber floor and yelled at Democrats, prompting a tense confrontation that nearly descended into fisticuffs.