I guess they would ixnay the character Iznogoud as well. 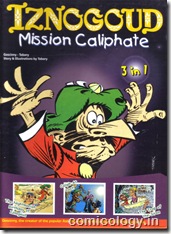 The books have proved hugely popular in Sweden, with copies given out free by McDonald’s in the past.
The other book, which was published in 1997, has pictures of what appears to be a bongo drummer dressed in bangles, paint, a skirt, a headdress, and sunglasses. The rest of the band wear formal attire.
Eva Dahlin, a spokesperson from Bonnier Carlsen, said that it was “unfortunate” that Lööf interpreted the decision as “an ultimatum”.
“This is about stereotypical depictions of other cultures, something that’s not so strange considering all the pictures were created in a context, in their time, which changes. If you’ve got a Middle Eastern background, for example, you can get tired of rarely being portrayed as being one of the good guys in literature,” she said.

‘Racist’ Swedish kids’ books could be pulled from shelves

Two books by Swedish author Jan Lööf may be removed from circulation after an investigation revealed that they contained “stereotypical depictions of other cultures”.

The two books – called “v” and “Ta fast Fabian” – were reviewed by publishers Bonnier Carlsen.
“They’ve given me an ultimatum. I either have to redraw the pictures or the books won’t be published anymore,” the author told the Dagens Nyheter newspaper.
One of the books, “Morfar är sjörövare” (which translates as “Grandfather is a Pirate”), was published back in 1966 and has since been translated into several languages.
In it, the main character meets a street seller named Abdullah and an evil pirate called Omar, who is pictured in the tweet below.