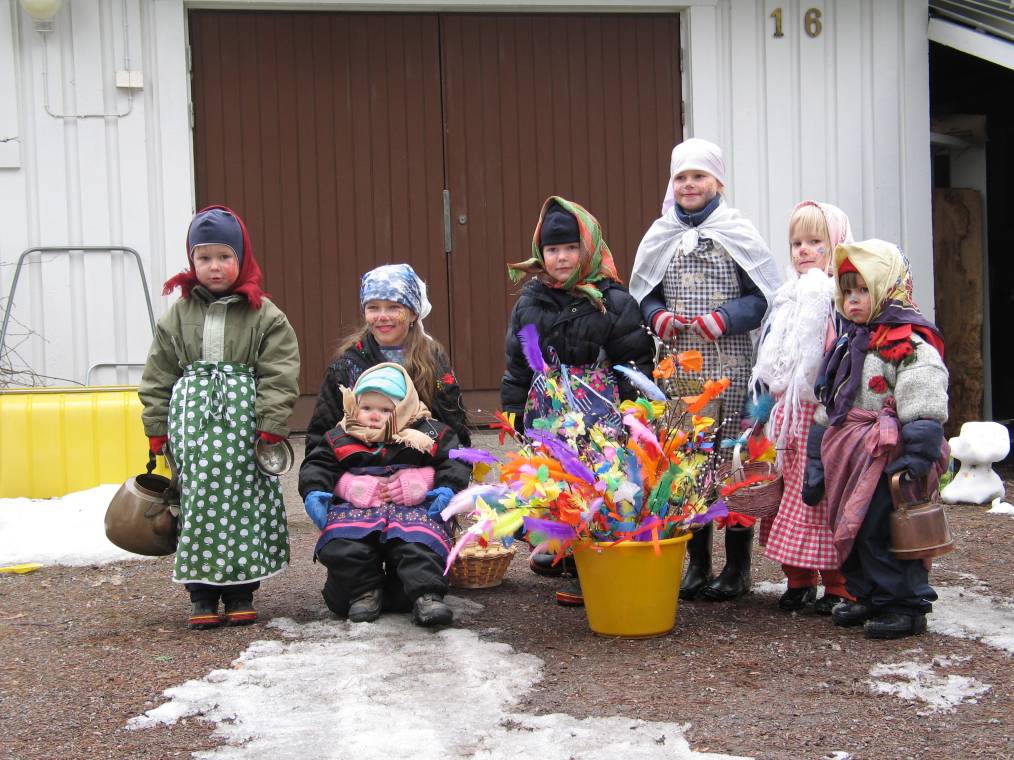 In Finland, Easter time brings out the little witches handing out willow branches with colored feathers in exchange for sweets, repeating the Finnish rhyme door to door:

A Finns politician posted: “Is this some kind of integration [programme] where Muslim children go around giving Easter blessings? Or does Allah also have some kind of anniversary today? It’s a pity I don’t have any condoms …”

Islam is not a race, it’s an ideology, a very destructive, violent, antisemitic, hateful ideology, but not a race. I place the idea of “being critical/ or impugning muslims as tantamount to being racist” right alongside that of the buffoonish term of ”age racism”. Yes, in Finland, that term has been invented to describe age discrimination.

Tampere region Finns Party politician Terhi Kiemunki has called on police to investigate Facebook posts in which she mocked Muslim children engaged in a Finnish Easter tradition on Palm Sunday. Kiemunki said she requested the investigation to refute widespread allegations that her posts were racist, and to silence what she called online trolls who have attacked her over the comments.

Local Tampere Finns Party politician Terhi Kiemunki issued a statement Friday in which she said she had requested a police investigation of Facebook posts widely perceived as racist.

Kiemunki, who is also a parliamentary aide to Finns Party MP Lea Mäkipää, said that in the weeks following her posts, many politicians, media outlets and private individuals had publicly denounced as racist her Facebook comments and other material she contributed to the Uusi Suomi blog.

“The media and people appearing in the media have used words such as ‘abusive’, ‘mocking’ and ‘frightening’. Internet trolls have written innumerable comments and blogs that have portrayed me as an extremely evil person,” Kiemunki wrote in the press release.

“I have filed a request for an investigation with preliminary investigators, asking them to determine whether my original writings were racist or bore the hallmark of any crime. After this we can calmly examine the trolls’ claims that have been communicated via the media,” she declared.

Comments about condoms and Allah

On Palm Sunday, Kiemunki took to Facebook on Sunday to post a series of comments about children whom she observed going door to door as part of the local tradition in which Easter witches visit homes to bless them in exchange for treats. The tradition has ancient roots in both Sweden and Karelia.

Seeing children dressed in hijabs engaging in the Easter tradition, Kiemunki asked on her wall, “Is this some kind of integration [programme] where Muslim children go around giving Easter blessings? Or does Allah also have some kind of anniversary today?”

“It’s a pity I don’t have any condoms …” she added, which some readers took to mean that she would have given them to the children’s parents.

“They didn’t come to us, it would have been funny to hear what kind of rhyme they recited or whether they would have just settled for ‘Allahu akbar’ (sic),” she also wrote.

The comments triggered a deluge of criticism, following which Kiemunki returned to Facebook to issue an apology.

Kiemunki has also served on the party’s national council and its leadership board. She was also a candidate in last year’s parliamentary elections.

Her boss, MP Lea Mäkipää distanced herself from her aide’s comments but said she wanted to giver her another chance. She asked Kiemunki to provide a written pledge not to repeat her actions.

Responding to Kiemunki’s request, police said that they rarely receive calls from members of the public to investigate their own actions.