The following interview with Stephan Steinmetz about a forgotten ghetto during the second world war in Amsterdam. It first appeared at Israel National News and republished here with the author’s consent. ASTERDORP: A FORGOTTEN DUTCH JEWISH GHETTO DURING THE HOLOCAUST

“During the German occupation of the Netherland, the small Asterdorp village in the northern part of Amsterdam served as an open Jewish ghetto. It existed as such for only a little over a year, during 1942-1943. In my recent book about Asterdorp’s history, the war-time covers less than a full chapter. Yet, I hope that the book and the resulting publicity will preserve the memory of that ghetto for all time.”

Dr. Stephan Steinmetz was born in 1956 in The Hague. He served as an independent advisor to municipalities for many years. In February 2016 he received his PhD at Amsterdam University for his dissertation presenting an in-depth study of Asterdorp’s entire history. His book has since been published commercially.1

“In the 1920’s Amsterdam municipality transferred inhabitants of condemned slums to new subsidized housing projects. However, the municipality’s officials considered some people too anti-social for the new housing. They then built Asterdorp where these transferees were to be reeducated. A supervisor checked that the new inhabitants kept their houses clean and used the public bath. In total 3,000 people lived there in the 1920s and 1930s, of which a third were poverty-stricken Jews. There was no organized Jewish life. The development failed, and by the time the Germans occupied the Netherlands in May 1940 almost all the houses were empty. 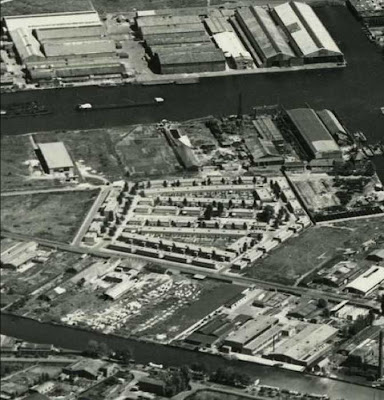 “In February 1942, the German occupiers told the Amsterdam mayor Edward John Voute, a Nazi collaborator that they needed Asterdorp for Jewish families, whom they would designate for transfer to the village. The Germans had just started persecuting stateless Jews. These were mainly German Jews who had fled to the Netherlands. Seven hundred of them had been living in Westerbork, a remote location assigned to them by the Dutch Government, prior to the war. The Germans intended to expand Westerbork and to make it the transit camp in the Netherlands for deportation of the Jews mainly to the German death camps in Poland.

“As Westerbork’s expansion wasn’t yet ready, the Germans wanted to move stateless German refugees to Asterdorp from several towns near Amsterdam. The first Jews who arrived there in May or June 1942 almost all belonged to that category. By the end of 1942, or in January 1943, all these inhabitants of Asterdorp had been transferred to Westerbork or had already been deported from there to the East.

“In the beginning of 1943, a second group of Jews came to Asterdorp, mainly mid-level employees of the Jewish Council. They had a Sperre, a stamp which exempted them from deportation. In May 1943 several of them went into hiding after they realized that their Sperre had become worthless.

“Asterdorp’s last remaining Jews were forced to move again in June 1943, this time to another open ghetto in Amsterdam. Their further stay there was short, and they were then transferred to Westerbork. During that ghetto period, 305 Jews lived in Asterdorp. I have not been able to trace any one of the deported. In the past year, I have however interviewed four or five people who as children went into hiding.

“Asterdorp was not guarded. A Jewish school and synagogue functioned in the ghetto for a short time, in the village’s gatehouse. After the war, the Amsterdam municipality tried to turn Asterdorp into a normal village, but nobody wanted to live there. In 1955, it was torn down entirely, with the exception of the gatehouse which is the only building still standing today. There are now efforts to turn it into a memorial for Asterdorp’s entire history.

“This was both morally reprehensible and factual nonsense. In January 1942, Jews had been forced to transfer all their money and valuables to LIRO, essentially a robber’s bank. Jews had no work or income. The Amsterdam officials should have been well aware of this. They said, very bureaucratically, that ‘We cannot refuse anyone, including people who earn too much. If we do, we may lose part of our subsidy.’ They consulted the Germans in charge of the persecution of the Jews who said that their only interest was that the Jews should live in the ghettos. The level of rent paid was of no importance to them.

“Thereupon the municipality decided to raise all rents in Asterdorp by 25%. The same happened less systematically in the Transvaal neighborhood. The Jewish Council rented rooms and paid for them from the LIRO money. This is one of several dubious practices against the Jews by the Amsterdam wartime municipality. The Jews who lived in the subsidized housing were also required to pay a security deposit, which was probably never returned.

“The survivors I interviewed were children during the war and could not tell me anything about the rent paid. Now that they know they were overcharged, some of them plan to ask for the money back.

“The filmmaker Saskia van den Heuvel is currently making a documentary about the Asterdorp ghetto. It will be shown around 4 May, Dutch National Memorial Day.”

Steinmetz concludes, “I will meet Amsterdam mayor, Eberhard van der Laan. I intend to raise the issue of the inflated rents charged to the Jews during the war. It is one of a number of stories about highly problematic behavior by the municipality toward the Jews. Another concerns charging Jews who returned after the war for long leases for the period they were in camps or in hiding. This money will now finally, seventy years after the war, be returned. There are similar stories of outstanding electricity and gas bills from the wartime period, which the returning Jews were made to pay. I have never been able to find proof of that. I intend to propose to the mayor that he should initiate a detailed investigation into the actions of the Amsterdam municipality toward the Jews during and after the war.”