By her own logic, any paloestinian could walk up to her, attack her, while insisting that she has already admitted that she doesn’t have a right to protect herself.

In more normal times when a Western state could carry out policies without international interference, scumbags like this would not be in the nation’s parliament, rather, tossed into the clink, and during times of war, punished according to the law of the land, whatever that may be.

Arab MK Writes Op-Ed in US Outlet: Israelis Not Entitled to Self-Defense

Arab Israeli MK slams Israel, saying it is not entitled to claim self-defense because it is an occupier.
By: Lori Lowenthal Marcus
Published: February 16th, 2016 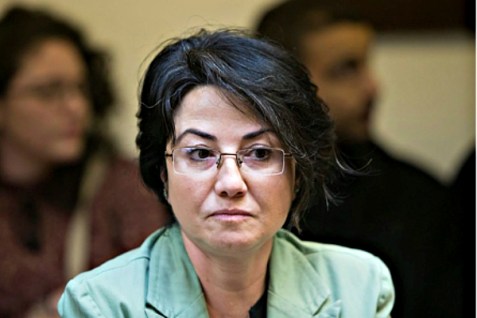 Haneen Zoabi is an Israeli Arab member of the Knesset who is frequently in the news for verbally attacking the Jewish State or for actions against Israel, such as participating in the anti-Israel Gaza Flotilla in 2010.

Zoabi also praised the Palestinian Arabs who kidnapped and murdered the three Israeli boys during the summer of 2014, called for a violent uprising against Israel, and has spit in the face of Arab Israeli police officers for being “traitors.”

Zoabi, 47, recently again showed her loyalty to those who murder Israelis by making a condolence call, with several other Arab MKs, on the families of terrorists who murdered Israelis, including one American Israeli, Richard Lakin.

Israeli Prime Minister Benjamin Netanyahu was infuriated by the visit, as were many knesset members across several different parties.

“MKs going to console families of terrorists who murdered Israelis are not worthy of serving in the Knesset,” Netanyahu said in a statement.