She has nothing to say about the ideology of post-hijra Islam (the 2nd act of Mo) which makes any such move totally irrelevant to the health of any society. She looks better in egg…… 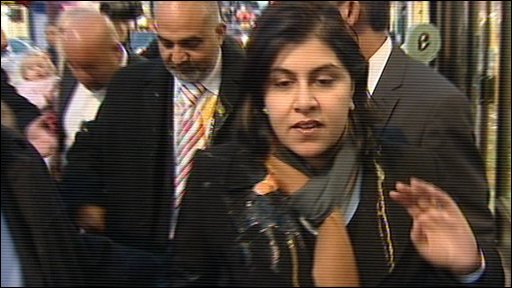 By SIMON WALTERS POLITICAL EDITOR FOR THE MAIL ON SUNDAY

New mosques should be built without minarets to make them look ‘quintessentially English’ and fit in with the landscape, according to former Tory chairman Baroness Warsi.

Warsi, Britain’s first Muslim Cabinet Minister, is to launch a nationwide competition to design a new mosque as part of a campaign to boost religious tolerance.

She claimed many of those in Britain are ‘ugly’, and that if new ones were built without minarets they could even look like a traditional village church. She also said the aim of her idea was to develop an ‘authentic British Islamic brand’. Baroness Warsi, Britain’s first Muslim Cabinet Minister, says new mosques should be built without minarets to make them look ‘quintessentially English’ and fit in with the landscape Baroness Warsi said historically, the function of the tower on mosques was to issue the call to prayer. Now the call is made by a loudspeaker, so Minarets (pictured on the Central London Mosque) are no longer necessary

‘We need a debate about what British Islam will look like in ten years’ time,’ she told The Mail on Sunday.

‘There is a saying in Islamic thinking that Islam is like a river that takes the colour from the bed over which is flows, the bed being the country in which it is found. Here, the river of Islam flows over an English river bed and so it should reflect its colour.’

Historically, the function of the tower on mosques was to issue the call to prayer. Now the call is generally made with a loudspeaker.