The Austrian state’s campaign of intimidation of those who stand up for liberty and freedom embodied in the Enlightenment.

The Koran teaches fear, hatred, contempt for others. Murder as a legitimate means of spreading and maintaining this devil’s doctrine. It denigrates women, divides people into classes and demands blood and more blood.

That a camel driver creates an uproar in his one-horse town; that he wants to make his fellow citizens believe that he had a talk with the Archangel Gabriel; that he brags he was carried away to Heaven and received there a part of this indigestible book, whose every page makes healthy human reason quiver; that to create respect for this book, he subjects his land to fire and sword; that he strangles fathers, abducts daughters; that he offers those defeated the choice of death or accepting his faith. 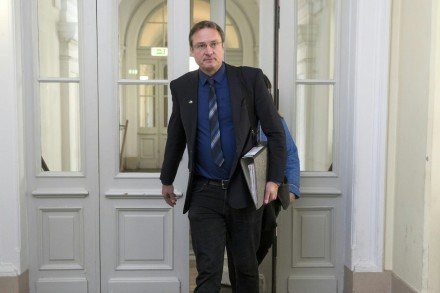 Long-time readers are familiar with Michael Stürzenberger, the German anti-jihad activist and member of Die Freiheit. Mr. Stürzenberger has been up on charges before for his political views in Germany, but now he has been tried, convicted, and sentenced in Austria. One of his “crimes” was to quote Voltaire on the topic of Islam.

Below is the report on the case from Michael Mannheimer’s blog. Many thanks to JLH for the translation:

Today, in Graz, Austria, German Islam critic Michael Stürzenberger was tried for “hate speech and denigration of religious doctrines.” The decision: Four months probation and a fine of €960. Since he asked for three days to consider, the decision is not yet legally binding.

If Voltaire were alive today, it would have been no different for him than for Stürzenberger. He would have been sentenced to prison because of his criticism of Islam. In a speech in Austria, Stürzenberger quoted the former terrorist imam, Nassim Ben Iman (who had turned his back on Islam) by saying: Islam is a religion that legitimizes killing. And paraphrased him: Every Muslim is a potential terrorist.

Well, anyone who knows the Koran knows that this is required by the Koran. And that brought him yesterday’s conviction. Even though the facts are clear: Anyone who refuses the battle against “infidels” is not seen by the Koran as a complete Muslim. In Graz, the gutmenschen (plaintiffs were the Greens) won a victory. But it is a pyrrhic one. For they have now created a martyr from the Islam-critical milieu. Not just anyone, but one of the best-known and most informed Islam-critics in Germany and Europe. Islam-criticism will show a strong growth. And the Red-Greens will find their Waterloo.

The Koran teaches fear, hatred, contempt for others. Murder as a legitimate means of spreading and maintaining this devil’s doctrine. It denigrates women, divides people into classes and demands blood and more blood.

That a camel driver creates an uproar in his one-horse town; that he wants to make his fellow citizens believe that he had a talk with the Archangel Gabriel; that he brags he was carried away to Heaven and received there a part of this indigestible book, whose every page makes healthy human reason quiver; that to create respect for this book, he subjects his land to fire and sword; that he strangles fathers, abducts daughters; that he offers those defeated the choice of death or accepting his faith.

That, of a certainty, is something no one can excuse, unless he was born a Turk or superstition has extinguished any natural light of his understanding.

The trial is reported in the Tiroler Tageszeitung:

Graz — In the Graz provincial criminal court, Michael Stürzenberger — a political activist and member of a small rightist party — had to answer for hate speech and denigration of religious doctrines. He had appeared at a PEGIDA “walk” as a guest speaker in Graz in the spring, and is said to have characterized all Muslims as potential terrorists.

The 51-year-old appeared at the PEGIDA demonstration in Graz’s Freedom Square on Palm Sunday. State’s Attorney Johannes Winklhofer accused him of having said literally: “Every Muslim is a potential terrorist.” Further , according to the complaint, he called the Koran “the worst book in the world.” “I am innocent, because I only state facts”

Stürzenberger, who is also he head of the minor party Die Freiheit, defended himself against the charges: “I am innocent because I am only passing on facts.” He emphasized that his goal was an intensive explanation of Islam. “We have nothing against Muslims as people. We also want to enlighten moderate Muslims,” was his justification. “Why didn’t you say that?” asked Judge Julin Riffl.